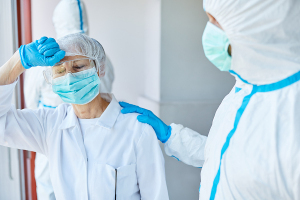 COVID-19 has left oncologists with a huge backlog of cases and feelings of stress
Cancellations and delays in cancer treatment due to COVID-19 have created huge backlogs for oncologists, who have increasingly experienced high levels of burnout since the start of the pandemic.

These claims were made in a number of independent studies presented this month at the ESMO Virtual Congress 2020, where their authors each discussed the pressures the outbreak has placed on healthcare systems worldwide.

“There is a risk that the diagnosis of new cancer cases will be delayed, and that more patients will be diagnosed at a later stage of their disease,” Dr. Guy Jerusalem, an author of one of the studies who works at Centre Hospitalier Universitaire Sart Tilman in Belgium, said in a statement.

Jerusalem and his colleagues questioned oncology centers in 18 countries and found that among cancer treatments, surgery was the most likely to be cancelled or delayed (in 44.1% of centers), followed by chemotherapy (25.7%) and radiotherapy (13.7%). An earlier end to palliative care was also observed in 32.1% of centers. More than 60% reported clinical activity to have dropped at the peak of the pandemic, while nearly two-thirds (64.2%) saw undertreatment as a major issue and 37% expected significant reductions in clinical trials this year.

Another study from April of 356 cancer centers across 54 countries found 88% had trouble providing care throughout the pandemic. One issue was patients and staff contracting COVID-19, which affected 54% and 45%, respectively. More than half (55%) reduced services preemptively, while others were forced to do so after being overwhelmed by the situation (20%); or because they were short of personal protective equipment (18%), staff (18%) and medicines (9.8%).

This led to more than one in 10 patients missing at least one cycle of treatment in 46% of centers, with some estimating that up to 80% of patients were exposed to some harm. More than 80% of centers (83.6%) implemented virtual clinics and 93% implemented virtual tumor boards to address this issue, with over half of respondents suggesting that they would continue to use both after the pandemic. In addition, 76% of centers performed routine tests in labs close to patient homes and 68% shipped medication to patients to continue treatments.

"The detrimental impact of COVID-19 on cancer care is widespread, with varying magnitude among centres worldwide,” said study author Dr. Abdul-Rahman Jazieh of King Abdulaziz Medical City in Saudi Arabia, in a statement. “The pandemic has impacted healthcare systems globally, interrupting care and exposing cancer patients to significant risks of being harmed."
1(current)
2