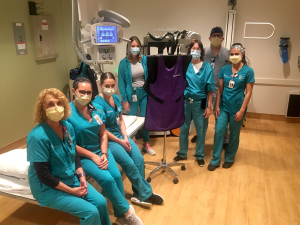 The health system has so far stopped using the aprons at Yale New Haven Hospital and is ending the practice completely at Bridgeport Hospital. It plans to do the same at other Yale New Haven Health providers, including Greenwich Hospital, reported LMTonline.

"For at least a decade, the medical physics community and radiology community have realized that the pelvic shielding on patients was providing little, if any, benefit in helping decrease radiation dose to the gonads (reproductive organs)," Dr. Jay Pahade, radiology medical director for quality and safety at Yale New Haven Health, told HCB News. "Dose reduction technology has also played a role in changing this practice, as overall radiation doses for X-rays have fallen significantly over the last 50 years. In addition, use of newer technology like automated exposure control (which is designed to keep image quality consistent by automatically increasing or decreasing radiation dose for patients of different sizes) can function poorly if the lead is accidentally placed inside the field of view of the X-ray."

Used primarily to protect ovaries and testes from radiation, radiologists and doctors have questioned for a long time if these shields actually do any good, since the amount of radiation in modern X-rays is low. Radiologyinfo.org says that a chest X-ray delivers as much as 10 days of background exposure, a mammogram is equivalent to seven weeks and a scan of a hand or foot is about three hours.

For example, if the lead shield is detected by the machinery, “it will actually be seen … as if it is a large person” and increase the amount of radiation, Adel Mustafa, Ph.D., chief physicist at Yale New Haven Hospital department of radiology and biomedical imaging, told LMTonline.
1(current)
2