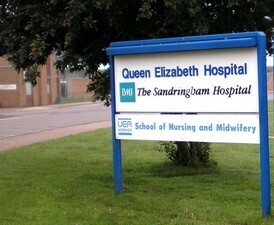 A patient at Queen Elizabeth Hospital in England has died after a physician mistakenly read a CT scan belonging to another patient
A mix-up in CT scans has resulted in the death of a patient at a hospital in King's Lynn, England.

Queen Elizabeth Hospital is at the center of an inquest following the death of 28-year-old Lucas Allard, who died of a ruptured aortic aneurysm in March 2019. Initially discharged, he was called back after it was discovered that a doctor mistakenly read the CT scan of another patient. He suffered a heart attack while being transferred from his wheelchair to a bed and died, according to Lynn News.

“We have learnt from this case and made a number of improvements since Mr Allard’s death to prevent a recurrence, including simplifying our administration processes,” Dr. Govindan Raghuraman, deputy medical director at the Queen Elizabeth Hospital, told the British local news organization.

Admitted to the hospital in March with chest pain that had spread to his back and shoulders, Allard underwent a CT scan which he was told showed no abnormalities. He was provided with a dose of morphine to ease the pain before being released.

A consultant reviewing the scans of A&E patients found that the wrong scan was copied and pasted into the computer system. Allard was called back to the hospital and was due to be transferred to Royal Papworth Hospital, a specialist lung and heart hospital, for a surgical operation when he died. His death was related to Marfan syndrome, a condition that affects connective tissues. Allard’s mother and brother previously died in 2013 and 2015 from the condition, respectively.

An inquest into his death was postponed in November 2019 due to a request from the coroner for more information on the hospital's computer systems. The error in question was chalked up to the computer system, which runs several programs at once and is slow to use. Dr. Masud Isham, the doctor who interpreted the wrong scan, was also working overtime, having been due to finish his shift at 1 AM. Due to staffing demands from an overcrowded emergency department, he did not finish until 3:30 AM.

The hospital has since switched from using multiple software programs to Windows 10 and plans to buy a more user-friendly computer system with reduced manual steps. It admits that Allard's death could have been prevented had the radiologist on duty told the secretary directly, or if Dr. Isham had read the date of the report. It told the inquest that any abnormal radiology findings will be reported immediately and has also reduced pressure on overnight staff to prevent fatigue and multitasking.

"The A&E is always crowded and busy, and doctors and nurses are always tired, that is the nature of the beast. What I was concerned about in hearing the evidence is that Dr. Isham did not seem to be able to explain what had gone wrong in what seems to be a basic concept,” said coroner Yvonne Blake, adding “if you are getting a CT scan on your computer it would be nice for you to have the right report and date. It's not rocket science is it?"

A memorial fundraiser has been set up online for Allard.