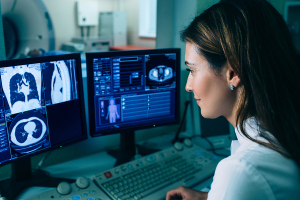 Typically, radiologists provide a written description of their findings to the physician who ordered the chest CT scan. Under the new system, radiologists classify pulmonary findings into one of 8 categories and patients with findings suspicious for lung cancer (category 5) are automatically referred to a daily triage physician who provides treatment recommendations.

The observational study, published in November in the journal Chest, included 99,148 KPNC patients age 18 and over who had a chest CT between January 2015 and July 2017. During that time, 40% of the patients were tagged under the new system, and 2.9% were diagnosed with lung cancer. Patients whose scans were reviewed with the new reporting system had 24% greater odds of an early-stage lung cancer diagnosis than patients whose scans were read before the new system was implemented.

"It’s of immediate value to patients for us to be able to explain that we have experts who are looking at the scan and that we have a plan for them," said first author Dr. Thomas Urbania, a radiologist at The Permanente Medical Group, in a statement. "We can’t make the bad news go away, but we can tell them ‘we’ve got you.’”

Lung cancer found at an earlier stage is easier to treat and patients have better outcomes. Currently only about 17% of lung cancer cases are diagnosed at an early stage. When found early, relative 5-year survival rates are 59%. However, the majority of lung cancers — 57% — are not diagnosed until the cancer has spread, or metastasized, to other parts of the body. For these patients, relative 5-year survival rates are 5.8%.

“Once you streamline one part of the system, you need to look at other parts of the system downstream,” said Urbania. “Now that we’ve eliminated one delay, we can make improvements in other areas.”

Future studies will look at whether the new system improves lung cancer survival rates. The researchers’ expectation is that it will. “It’s reasonable to assume that if more people are diagnosed earlier, more people will survive longer,” Urbania said.

The new strategy is modeled after a similar approach used for reporting results from screening mammography.