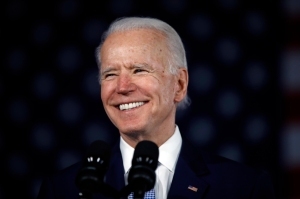 The former vice-president and senator underwent a weight-bearing CT scan as a follow-up for hairline fractures he suffered in his foot over Thanksgiving weekend, according to KYW Newsradio.

Biden suffered the fractures from a slip he incurred while playing with his dog. An initial X-ray did not show any obvious fractures but more detailed CT imaging confirmed the hairline fractures in the midfoot. He donned a walking booth for a few days after and now has a small limp, according to the Associated Press.

The follow-up this past weekend was an assessment of how well his foot was healing. Biden arrived at the hospital at 11:20 a.m. and left an hour later.

"He appeared in good spirits and appeared to talk to a pedestrian on the street,” according to a pool report. "He gave friendly waves to reporters and a few scattered onlookers on the street as he walked away. He continued to wave from the perch of a black SUV before climbing inside."