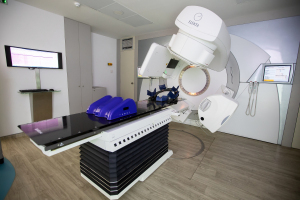 Early pilot funding from Dartmouth-Hitchcock's Norris Cotton Cancer Center (NCCC) and Dartmouth's Thayer School of Engineering was used to prototype the converted LINAC, with preclinical testing of the beam beginning in August. They are calling the work, "Electron FLASH Delivery at Treatment Room Isocenter for Efficient Reversible Conversion of a Clinical LINAC.”

"This is the first such beam in New England and on the east coast, and we believe it is the first reversible FLASH beam on a clinically used LINAC where the beam can be used in the conventional geometry with patients on the treatment couch," said Brian Pogue, co-director of NCCC's Translational Engineering in Cancer Research Program and co-author on the project, in a statement.

FLASH enables radiation to be delivered at high dose rates that spare healthy tissue, while still treating tumors just as effectively. With it, clinicians can deliver radiation at a rate 3,000 times higher than with standard radiation therapy, at 300 Gray per second compared to 0.1 Gray per second. This enables entire treatments to be completed in six milliseconds.

The team is currently conducting preclinical studies on both experimental animal tumors and clinical veterinary treatments to study normal tissue-sparing effects and how to enhance the treatment’s efficiency. Preclinical testing has already provided data on the potential for different tumor plans.

The research group consists of members from Dartmouth, Dartmouth-Hitchcock NCCC, Dartmouth Engineering, and Dartmouth-Hitchcock's department of surgery. It has expanded to include physicians in clinical radiation oncology and dermatology, with the aim being to conduct the first human safety trial with FLASH radiotherapy at Dartmouth-Hitchcock on patients with advanced skin lesions that cannot be removed surgically.

The first human clinical trial for FLASH began in November, with the first patient treated at Cincinnati’s Children’s/UC Health Proton Therapy Center. It uses a Varian ProBeam proton therapy system modified to deliver radiation treatment at ultra-high dose rates and is expected to enroll up to 10 patients with bone metastases to evaluate clinical workflow feasibility, treatment-related side effects and efficacy of treatment as assessed by measuring pain relief of trial participants.

"The prior three years of preparation by the researchers, engineers, clinical and physics teams culminated in a treatment that was completed in the literal ‘blink of an eye’, and the patient was discharged feeling well," Dr. John Breneman, medical director of the Cincinnati’s Children’s/UC Health Proton Therapy Center and the trial's principal investigator, told HCB News at the time.

The Dartmouth team is currently awaiting potential funding for its project from the National Institutes of Health.

Their work was published in the International Journal of Radiation Oncology, Biology & Physics.