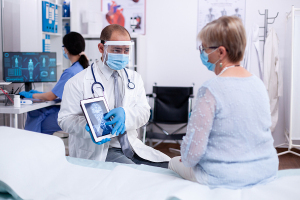 A new study confirmed a strong correlation between spikes in COVID-19 infection and a steep decline in cancer screenings, highlighting a growing need for greater awareness and availability of at-home screening and diagnostic options for patients.

Building on earlier work, researchers at Dana-Farber/Brigham and Women’s Cancer Center conducted a review of patient data from Massachusetts General Brigham from March 2, 2020 through June 2, 2020, the first peak of the pandemic, and then for comparison, the three months before and after this peak, as well as the same three month period in 2019.

“It’s widely thought that fewer people were screened for cancer and precancerous lesions during the first surge of the pandemic, because of limitations on non-urgent medical procedures, restrictions on patient volume, and patients’ concerns about the spread of the virus and the need for social distancing," said study co-author Dr. Ziad Bakouny in a statement. "For this study, we wanted to document the extent of this decline, and its impact on cancer diagnoses, at a major U.S. health care system.”

Their statistical analysis revealed a sharp decline in cancer screenings during the three month infection rate peak, and thus, a proportional reduction in average cancer diagnoses during that period. According to their analysis, during the peak, screening declined at Mass General Brigham by as much as three-fourths compared to pre- and post-peak infection levels.

Although the immediate recovery of screening numbers once the infection rate declined is encouraging, even a three-month delay in receiving a cancer diagnosis can significantly worsen the prognosis for patients who are afflicted with more rapidly spreading types of cancer. For forms of cancer that quickly metastasize, such as lung cancer, early detection and treatment is critical to patient survival. In December, researchers from the University of Cincinnati published work examining the same corresponding period, and found that for the month following the peak, once lung cancer screening operations fully resumed in June, 29% of patients were referred for a suspected malignancy compared with only 8% pre-COVID-19.

Other research has indicated that the decline in screenings cannot be only explained by a strain on hospital resources and necessary prioritization of urgent care. Patient fear, stay at home orders and other mitigation responses may also have substantially contributed. The impact of reduced screenings will likely have a disproportionate effect on Black, Hispanic, Native American, and other underserved communities with less access to healthcare, along with statistically worse health outcomes more generally.

“I think that if we see 10,000 excess [cancer] deaths over 10 years, the proportion of minority communities affected will be greater unless something is done,” noted John Carethers, chair of internal medicine at the University of Michigan, in an unrelated Scientific American article examining the effects of reduced cancer screening during the COVID-19 pandemic.