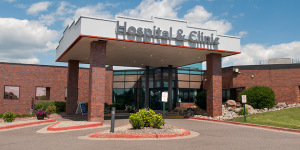 Four were injured and one was killed during the shooting at the Allina clinic
A shooting at a Minnesota healthcare clinic has left one person dead and four others injured.

Gregory Paul Ulrich, 67, opened fire Tuesday morning at an Allina clinic in Buffalo, 40 miles northwest of Minneapolis, and was arrested before noon. Bomb technicians were also called in to investigate a suspicious device found there, as well as others at a motel where Ulrich was staying, according to the Associated Press.

The five victims were rushed to the Hennepin County Medical Center. Spokeswoman Christine Hill told the AP that one of the victims died Tuesday night. Three are in stable but critical condition and the fourth has been discharged.

While a motive has not been made clear, Ulrich was reportedly unhappy with the healthcare he received at the clinic and had a history of conflict with healthcare clinics in the area, said Police Chief Pat Budke in a new conference.

“All I can say is, it’s a history that spans several years, and there’s certainly a history of him being unhappy with healthcare ... with the healthcare that he’d received,” Budke said.

Calls for service against Ulrich date back to 2003 for drunk driving, possession of marijuana and an order issued in 2018 and 2019 that barred Ulrich from having contact with a man. While the man’s name was not given, it appeared to match that of a doctor listed on the clinic’s staff list. Based on his history, police believe Ulrich may have been targeting the clinic or someone inside it, but said it is too early to tell if it was the doctor in question. The doctor did not answer a phone call made to him Tuesday and it is not known if he was among Ulrich’s victims.

A search of the clinic for more victims led to the discovery of a suspicious device and the evacuation of the building. It was not immediately clear if the device exploded but shattered plate-glass windows were seen in TV footage of the clinic. Suspicious devices were also found at a local Super 8 motel where Ulrich was staying, where at least two windows were also broken, according to the AP.

FBI bomb technicians were called to the scene, alongside the Minneapolis Police Department’s bomb squad, members of the Bureau of Alcohol, Tobacco and Firearms’ enforcement group and special agents from the state’s Bureau of Criminal Apprehension. Law enforcement also searched a small mobile home where Ulrich had lived, while a perimeter was set up around the clinic by emergency vehicles and armed law enforcement officers.

“None of the information that we have from our past contact with him would indicate that he was unhappy with, or would direct his anger at, anyone other than people within the facilities where he had been treated or where they had attempted to give treatment,” Budke said.

Police do not believe the attack is related to domestic terrorism.