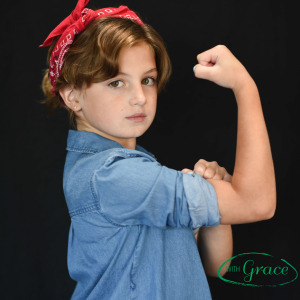 Photo of Grace Eline provided courtesy of the American Childhood Cancer Organization and WITH Grace Initiative.
From the March 2021 issue of HealthCare Business News magazine

Nearly three years ago, when Grace Eline was diagnosed with a germinoma, a brain tumor most commonly found in children and adolescents, the then nine-year-old didn’t have to travel far to receive precise treatment.

The trip to the Laurie Proton Therapy Center in New Brunswick, New Jersey, was just about 35 minutes door-to-door from the family’s home in suburban Gillette. The relatively easy commute and ability to recover from the two dozen rounds of radiation therapy with protons was easier in more familiar surroundings.

“If I was ever feeling really bad, it felt better to have the comfort of home,” said Grace, now 12, who was a guest at the 2019 State of the Union address.

Grace’s tumor was located in a fairly central part of her still-developing brain, which meant that any surgery would be too complex. After a few rounds of chemotherapy, her physicians determined that she was an ideal candidate for proton therapy, which delivers higher doses of radiation to the tumor via a more precise dose, with less damage to surrounding tissue.

Grace’s mom, Aubrey Reichard-Eline noted that many of the patients and their families needed to travel for treatment. Being in Northern New Jersey meant they had access to top-notch facilities.

“I tell people Grace got cancer in the best place you could have it,” Aubrey Reichard-Eline said.

Highly specialized
Access to proton therapy has been increasing, though many young patients still have a complex journey.

Two decades ago, there were only two proton centers in the U.S. — one in California, at Loma Linda University, and the Francis H. Burr Proton Therapy Center at Massachusetts General Hospital in Boston. Today, although there are 35, according to Dr. Andrew Chang, president of California Protons Cancer Therapy Center in San Diego, only a little more than a dozen of those have pediatric programs, which require a high degree of specialization.

Pediatric patients are the best candidates for this precise treatment, as their developing bodies are more sensitive to radiation and also have a greater risk of developing cancer as a result of radiation exposure up to 50 years down the line, he explained. Additionally, since younger children are referred more often than older children, 42 to 46% of the patients require anesthesia. There is also more complex integration of care for pediatric cancer treatments with half of the most commonly treated diagnoses requiring chemotherapy during radiation, often necessitating a daily ambulance transfer to and from the hospital.
1(current)
2
3
4