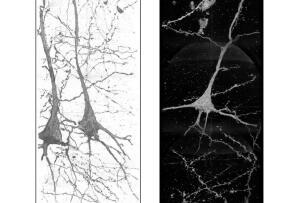 These 3D images of neurons in the brain of a schizophrenia patient show wavy, distorted neurites, which indicate that the condition may be linked to the shape of the neurons. X-ray images were taken at the Advanced Photon Source.
Use of synchrotron radiation nanotomography has allowed researchers to produce uncorrupted 3D images of neurons and blood vessels for the purposes of studying schizophrenia’s effect on brain tissue.