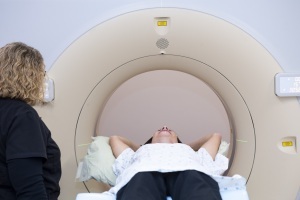 The USPSTF has issued new age and smoking history criteria for those eligible to undergo lung cancer screening (Photo courtesy of University of Cincinnati)
Current and former smokers should undergo annual lung cancer screenings starting at age 50, according to final guidelines issued this week by the U.S. Preventive Services Task Force.

The recommendation lowers the original age limit from 55 to 50 and redefines the definition of a heavy smoker as someone with a 30 pack-year history (one pack a day for 30 years) to a 20 pack-year history. Like the most recent 2013 version, the new guideline pertains to those who still smoke or have quit in the last 15 years and refers to those 80 or under.

“By screening people who are younger and who have smoked fewer cigarettes, we can save more lives and help people remain healthy longer,” said USPSTF member Dr. Michael Barry in a statement.

Lung cancer is the number one cause of death in the U.S., with more than 200,000 people diagnosed annually. Smoking is the leading cause, and the Task Force expects the new recommendations to nearly double the number of people eligible for lung cancer screening to 15 million people, reports the Washington Post.

The changes are expected to especially be helpful for Black people, who have a higher risk of lung cancer than white people despite smoking fewer cigarettes than white men. They also are seen as potentially lifesaving for women, who also smoke less than white men.

The guidance is a B recommendation, meaning that private insurers are required to cover it without levying a share of the cost on to the patient, as specified in the Affordable Care Act. The ACA mandates that private payers adopt updated USPSTF guidelines within one year. Medicare also tends to follow the group’s guidelines, according to the Washington Post.

The final recommendations are based on an updated evidence report and review of 223 previously published studies, reports CNN. They were first issued in a draft in 2020 that was open to public comment between July 7 and August 3. The aim is to increase the number of people undergoing low-dose CT screening for lung cancer, as only less than 15%, under the previous guidelines, did so each year.
1(current)
2