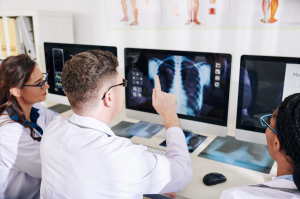 Radiologists hired by coal miners' employers to read their chest X-rays are more likely to be financially biased in their assessments for black lung disease
Chest X-ray diagnoses for coal miners may be compromised due to financial bias on the part of the doctor that read them.

That’s according to researchers at the University of Illinois Chicago (UIC) investigating assessments of coal worker’s pneumonoconiosis (also known as black lung disease), which is caused by the inhalation of dust. Physicians hired by the U.S. Department of Labor or a miner were found to be less likely to have biased assessments, compared to those hired a miner’s employer, according to their study.

"Not only are those hired by an employer much more likely to classify a chest X-ray as negative for black lung disease, but it is also much more likely that an employer will have the resources to hire its own expert — at a much higher fee — in the first place,” senior author Dr. Robert Cohen, clinical professor of environmental and occupational health sciences and director of the Mining Education and Resource Center at UIC, said in a statement.

Diagnoses were made by 264 physicians from 63,780 X-rays of coal miners who filed workers’ compensation claims of total disabling disease with the Federal Black Lung Program, reported the authors. B-readers — individuals certified to review radiographs for black lung disease — who were hired by a coal miner’s employer listed 84.8% of images as negative for black lung disease. Those hired by the USDOL marked 63.2% negative and those hired by a miner labeled 51.3% negative. Sixty-four listed black lung disease as absent in 95% of their classifications. Of these classifications, 93.3% were made by employer-hired B-readers. Fifty-one made negative diagnoses in more than 99% of their assessments.

Cohen and other senior author Lee Friedman recommend greater enforcement of current regulations for decertifying B-readers and that initial contact and payments be made by the USDOL. They also suggest barring readers and requesters from communicating until initial classifications are submitted, as well as diversifying B-readers; regulating reader fees; requiring disclosure of wholesale relations and associated income from related classifications; and investing in AI.

"It is very likely that this issue extends beyond the Federal Black Lung Program and is pervasive across workers' compensation systems,” said Friedman, associate professor of environmental and occupational health sciences at the UIC School of Public Health, in a statement.

The findings were published in the Annals of the American Thoracic Society.