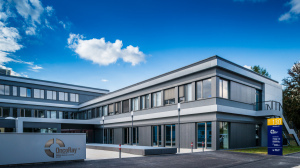 To see if real-time imaging could synchronize the proton beam to tumor motion, the researchers combined a rotating, open low-field 0.22 Tesla MR scanner designed by ASG Superconductors for the LINAC-MR system from Alberta Health Services, with an actively scanned proton beam at OncoRay. The results showed strong MR image quality during irradiation with a static beam.

Hoffmann plans to build a prototype that may be used clinically at some point. ASG Superconductors will produce the mid-field-strength open 0.5 Tesla MR device, which will be specifically adapted to the requirements of real-time MR-guided radiation therapy by the Alberta Health Services LINAC-MR group and its spin-off company MagnetTx Oncology Solutions. Engineers at MagnetTx Oncology Solutions are developing the gantry required to rotate the MR scanner and the image processing methods for automatically tracking tumors in real time.

"New capabilities provided by MR-integrated proton therapy include an increased targeting accuracy for the treatment of moving tumors, an expansion of the range of possible organs which can be targeted with increased precision and less normal-tissue side effects, and last but not least, this technique will inform the repurposing of radiation therapy to address other pathologies, such as arrhytmic myocardial tissue ablation with highest precision comparable to surgical procedures," Hoffmann told HCB News.

The design and manufacturing of the device is underway, with the team planning to combine it with the actively scanned experimental proton beamline at the OncoRay facility in summer 2022.