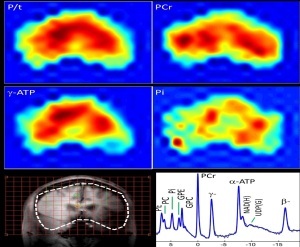 Researchers at the Center for BrainHealth at the University of Texas at Dallas have found that consumption and reserve functions for neurological energy metabolism in the brain may be compromised in cases of mild cognitive impairment (MCI), the stage of decline between healthy aging and serious diseases like dementia and Alzheimer’s. It is believed to be the first paper to confirm that energy reserve decreases in MCI, in many cases, years before Alzheimer’s disease begins.

"Alzheimer's disease starts at the molecular level in the brain even before the accumulation of beta-amyloid and tau in a vulnerable population. The use of ultrahigh-field magnetic strength at 7 Tesla has enabled researchers to detect these early molecular changes in real time, primarily in brain research focused on energy metabolism," said lead author Dr. Namrata Das, a program specialist and research neuroscientist in the School of Behavioral and Brain Sciences.

Postmortem research has shown that the metabolism deficit is lower in earlier stages of Alzheimer’s than in severe cases. Das and her colleagues, as a result, theorize that the energy level disturbance occurs early on in the disease.

The researchers plan to combine this energy-level biomarker with PET scans to measure common Alzheimer’s markers beta-amyloid and tau protein. They also want to adapt their techniques for use in 3T machines, due to their being more widely available than 7T scanners.

"The study conducted was cross-sectional. A longitudinal study is required to understand and track the early molecular changes in the brain. The use of 7-Tesla MR machines has enabled us to understand the neurochemical/molecular changes in the brain with accuracy and precision. As the availability of 7 Tesla for clinical application is limited, future work has been proposed to translate the findings at 7-Tesla to 3-Tesla MR machines which are widely available for practical applications."

The findings were published in Frontiers in Neuroscience.