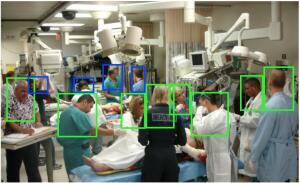 The developers of the Safety Critical Deep Q-Network believe it to be the first robotic navigation system to account for high-acuity patients when determining the safest and quickest pathways
Computer scientists at the University of California San Diego have created a navigation system that enables robots in the ER to move through hectic clinical environments without getting in the way of busy clinicians as they tend to patients in critical or serious condition.

Known as the Safety Critical Deep Q-Network (SafeDQN), the navigation system is built with an algorithm that tracks how many people are together in a space and how quickly or abruptly they are moving. Its purpose is to help robots continue supporting emergency workflow by delivering supplies and materials to physicians and nurses without distracting clinicians caring for high-acuity patients, according to professor Laurel Riek.

"To our knowledge, this is the first work that presents an acuity-aware navigation method for robots in safety-critical settings," Riek, professor of Computer Science and Engineering and Emergency Medicine at UC San Diego, told HCB News.

The algorithm was trained on more than 700 YouTube videos of documentaries and reality shows, such as "Trauma: Life in the ER" and "Boston EMS". The entire set of videos has been made available for other research teams to train their algorithms and robots.

Riek and her colleagues tested the algorithm in four simulated scenarios where a robot was tasked with delivering supplies in a busy ED. Each scenario included places where high-acuity patients were treated in hallways and others where clinicians might be treating low-acuity patients, with the robot tasked with determining the safest and also quickest path. The SafeDQN system generated the safest and quickest paths in all cases, better than three other state-of-the-art robotic navigation systems: Random Walk, A* and Dijstra (all p < 0.001, with medium to effect sizes).

They plan to test the system on a physical robot in a realistic environment next and will also partner with UC San Diego Health researchers to operate the campus’ healthcare training and simulation center.

“Currently, ED workers get interrupted approximately every six minutes, which has a huge negative impact on patient safety, patent experience, and healthcare worker well-being,” said Riek. “It is important the sensing and navigation systems on such robots take patient acuity into account when performing these tasks, so as not to be an additional source of interruption or be a safety risk themselves. Our work aims to address this gap.”

The algorithms can also be used outside the emergency department for endeavors such as search and rescue missions.

The computer scientists will present their research in a paper at the International Conference on Robotics and Automation in June in Xi’an, China.