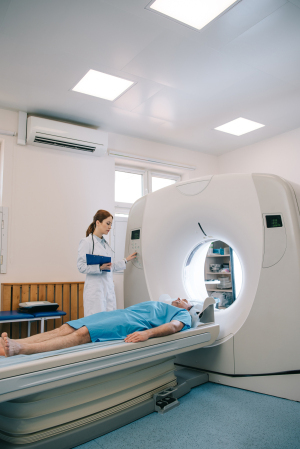 Researchers at NorthShore University HealthSystem say such scanning should only be administered to those that show any signs of recurrence. “The amount of money spent on imaging in patients who ultimately proved to be disease free is substantial and should be carefully considered in the context of the current healthcare financial setting,” wrote Dr. Cheryl Nocon, an otolaryngologist who worked with NorthShore at the time of the study but now practices in Los Angeles, and co-authors.

Nocon and her colleagues found that among 136 head and neck cancer patients the average individual received 14 imaging studies while being monitored over 3.2 years at an average cost of $36,800. Those who lacked symptoms had four imaging exams each year at an annual cost of $9,600, with only 10.3% developing a recurrence. Those who developed a recurrence had five more studies per year of follow-up and paid $10,600 more in associated average costs than those who remained disease free.

While the National Comprehensive Cancer Network recommends follow-up imaging within six months after treatment, further scanning after is deemed only necessary for those that show signs of recurrence. Providers, however, often prescribe multiple rounds of costly imaging for patients that show no signs.

This, according to another study published in JNCCN, has brought U.S. spending on head and neck cancers up to $4.2 billion, with per-individual expenditures similar to those with far more prevalent cancers such as lung and colon.

While not involved in the study, Dr. Bruce Brockstein, Kellogg-Scanlon chair of oncology and director of the Kellogg Cancer Center and division head of hematology/oncology at NorthShore University HealthSystem, says one approach to reducing unnecessary follow-up imaging is to form multidisciplinary tumor boards that meet regularly to discuss difficult and challenging cases. These can consist of radiologists, medical oncologists, surgical oncologists, radiation oncologists and pathologists among other professionals.

"The group garners input from the entire team regarding how to specifically proceed with care that is in the best interest of the patient," he said. "While we do follow the NCCN as our basic guideline, we feel it's imperative to meet as a group to reevaluate, discuss and review such guidelines based on the data available in the current situation, provided to us and, also, in light of our current patient profiles that exist today in 2021."

Data used by NorthShore included targeted CPT codes for neck imaging using ultrasound, CT and MR, along with chest and maxillofacial CT, among others. Patients were specifically diagnosed and treated for mucosal and salivary gland malignant tumors.

The findings were published in JAMA Otolaryngology – Head & Neck Surgery.