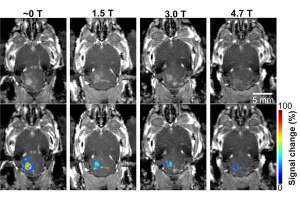 The discovery was made by researchers at Washington University in St. Louis and suggests that MR-guided focused-ultrasound may affect treatment outcomes for such procedures and other cavitation-mediated techniques.

“Findings from this study suggest that the impact of the magnetic field needs to be considered in the clinical applications of focused ultrasound in brain drug delivery,” said Hong Chen, associate professor of biomedical engineering in the McKelvey School of Engineering and of radiation oncology in the School of Medicine, in a statement.

Chen and her colleagues found that depending on the strength of the magnetic field, the BBB opening volume could drop by 3.3-fold to 11.7-fold in a mouse model. Injecting 30 mice with microbubbles, they performed focused-ultrasound sonication at 1.5T, 3T and 4.7T on three different groups. A fourth group never entered the magnetic field.

The team then injected a model drug, Evans blue, to see if the static magnetic field affected trans-BBB drug delivery. The images produced showed that the fluorescence intensity of the Evans blue was lower in mice that received treatment in one of the three strengths of magnetic fields compared to those outside of them. The Evans blue trans-BBB delivery fell by 1.4-fold at 1.5T; 1.6-fold at 3T; and 1.9-fold at 4.7T.

Cavitation is the fundamental physical mechanism in brain drug delivery and several other therapeutic techniques, including histotripsy and sonothrombolysis.