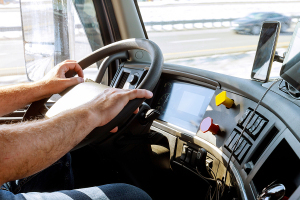 After more than two weeks on the road and a few tough jams along the way, a superload truck driver successfully delivered his cargo — a replacement MR building for a local hospital — to its destination in Maine.

The driver, Mike Saxton, was met with coffee, donuts and local residents ready to shake his hand as he rolled into Bar Harbor Thursday, with a trailer carrying the 142 foot long and 15 foot wide PDC MRI Cassette relocatable building, weighing in at 200,000 lbs.

The reaction he got was not the one he expected, he told CBS-affiliate, WABI-5. “We’re used to being cussed at, cursed at because we shut down the road. We’ve done this, why is it taking so long, this-and-that. So, it’s part of the job. You just gotta keep your head and get on your way.”

Saxton, who works for transport company Trans-United, had been on the road with his crew since June 30, traveling from Hartland, Wisconsin to bring the structure to Mount Desert Island Hospital in Bar Harbor.

The journey had some bumps along the way, with the truck and its cargo getting stuck on the Penobscot Narrows Bridge Wednesday afternoon in Prospect, Maine and again near the Asticou Inn in Northeast Harbor on Thursday. Getting stuck can be common when transporting large structures like this, says Saxton, with the crew always having a wrecker on standby to reduce the time it takes to clear the road and get the rig running again.

Traffic was rerouted for hours Wednesday after the truck got hung up while making the turn onto the Penobscot Narrows Bridge. It was again delayed Thursday due a flat tire.

“That stuff is kind of part of it. As weird as it sounds, it’s kind of expected. We learn to expect the worst and hope for the best,” Zak Fleming, the fleet manager at Trans-United in Burns Harbor, Indiana, told the Bangor Daily News.

Driving structures as large as MR buildings can be treacherous, according to Saxton. For this delivery, the crew planned everything two months in advance and even sent someone to Maine in a pilot car with a height pole to determine where they could and could not travel. It also worked with state officials to find the best route for something so large.

So the warm welcome from the locals was quite a happy shock for Saxton, who has been praised for his work on the Downeast Maine Traffic & Road Conditions Facebook page. One woman there wrote he used “great driving skills” throughout the difficult journey, while another called him “an amazing and patient driver”.

As a thank you, the hospital put Saxton up in a hotel room with an ocean view Thursday night and bought him a lobster dinner. “We can’t express enough how thankful we are to our exceptional delivery driver, Mike, our local public safety team, state police, the Maine Department of Transportation and our entire community who rallied around us to bring this vital piece of equipment home,” said hospital president and CEO Chrissi Maguire.

Locals also offered the next day to take the driver out for breakfast before he packed up and headed back to Indiana. One woman even started a GoFundMe page to raise money to bring him back for a vacation in Maine. The page had racked up nearly $1,600 by Friday afternoon.

“It was amazing. Definitely not what I was expecting from the northeast. We’re not, none of us is used to this. We do a job, once the job is done we’re off to the next one,” said Saxton, adding that the thanks here for just doing his job “makes me feel good, yeah. I mean, I do this, and… it’s pretty good.”