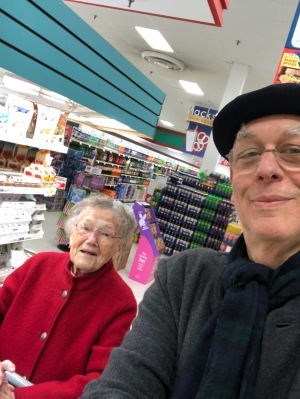 Helen and Phil
My wife Barbara's mother, Helen Fahringer, died this week. She was 103 years old.

Barbara spent a lot of time with her. During the pandemic she lived with her full-time and took care of her. Prior to that, we would drive three hours every weekend and Barbara would spend four days with her and return on the bus to New York City.

Helen had wonderful stories. She lived through the Roaring 20s, the Great Depression, the Dustbowl, the rise of Nazi Germany in Europe, World War II, the Cold War, the Korean War, race riots, the hippie movement, miniskirts, the space race, the Vietnam War, the wars in Iraq and Afghanistan and the pandemic.

Helen and I spent a lot of time together. I would take her for rides on the weekend. She told me stories about everything from milking her own cow to the first day that one of the farmers started the business of delivering fresh milk in a horse-drawn cart.

She talked about life in a small town before big-box stores and malls, when there was the local butcher and fishmonger.

She talked about dance halls, her first ride in an automobile, her first telephone, and a time when people dressed up to fly on an airplane.

One of my favorite stories...

She was driving to play golf in a Lincoln Continental four door convertible with four of her friends. Helen was an attractive woman with a beautiful smile and she was speeding. As the policeman was pulling her over she said to her friends, "Oh boy... I was speeding. I hope I don't get a ticket!"

When the policeman asked her if she knew why he pulled her over she shyly replied, "Why, no officer..." Whereupon one of the women in the backseat said, "Helen, you just said you were speeding."

Telling that story 50 years later, Helen laughed and rolled her eyes. "Some friends," she said. Incidentally, the policeman was smitten and did not write her a ticket.

One thing I will always remember about Helen is that she never complained about anything. As she got older she had a lot of physical problems but never let it bring her down. She also never criticized anyone, she never had a bad word to say about another person and she never gossiped.

She was thankful for every single day. She used to say that the small things don't matter.

The next time someone cuts you off in traffic, think of Helen and what she would do, and you will not get irritated.