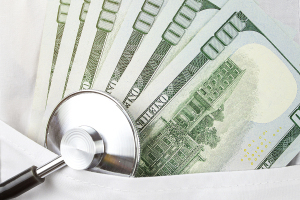 U.S. oncologists are earning more money and spending less but still face challenges in saving money
Despite seeing an average salary rise from $377,000 in 2020 to $403,000 in 2021, the majority of oncologists in the U.S. may be paying down mortgages and student debt while failing to save up a sizable portion of their income.

A wealth management advisor for physicians in Minnesota, Joel Greenwald discussed this view in Medscape’s Oncologist Wealth & Debt Report. Surveying 17,903 physicians in over 29 specialties — with oncologists making up 3% of respondents — the report recorded increased earnings and decreased spending but mixed findings when it came to saving money.

“There are certainly folks who believe that as long as they pay off their credit card each month and contribute to their 401(k) enough to get their employer match, they’re doing okay,” said Greenwald.

Fifty-five percent of oncologists reported making between $1 million and $5 million a year in 2021, up from 42% the year before. The percentage making over $5 million remained unchanged, while those making below $500,000 dropped from 26% to 16%. Females surpassed males in net worth with few exceptions, though only 2% made over $5 million compared to 22%, respectively.

In addition to being in the upper half of wealthy specialties, oncology holds the lowest percentage of respondents that earn below half a million annually. Driving financial success in this sector were cuts in expenses, with one quarter doing so by moving into less expensive homes or refinancing their houses, according to Greenwald. Staff cuts, renegotiating leases and adopting telehealth also helped, as did rises in home prices and the stock market, and for some physicians, reliance on the Paycheck Protection Program.

Savings were less lucrative, with 56% putting the same amount or more into 401(k)s each month and 32% putting less compared to previous years. Half put the same amount or more in after-tax accounts, while 29% put less. Financial losses from fewer patients and working fewer hours due to COVID contributed, said the report. Seventy-five percent had no significant losses, compared to 77% the previous year.

A majority of oncologists primarily spent their earnings paying off home mortgages, compared to 37% that had no mortgage to pay off. A significant portion paid off car loans and 17% on student debt, compared to 25% the year before. Almost 60% pooled their income with a spouse or partner to pay bills, while 25% did not share joint accounts. And about 55% had a general idea of how much they spent, despite not tracking it.

While oncologists fared better than most Americans in being able to pay off their bills, Greenwald says that many need to be more mindful of what they save versus what they spend. “I would say living within one’s means is having three to six months’ emergency fund; saving at least 20% of gross income toward retirement; adequately funding 529 college accounts; and for younger docs, paying down high-interest rate debt at a good clip.”

He adds, however, that the pandemic has helped with this way of thinking. “They cut back on spending because they were worried about big declines in income and also because there was simply less to spend money on.”