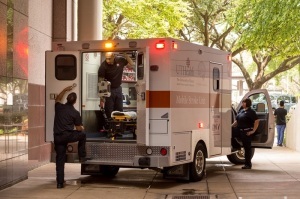 That’s according to a trial conducted at the University of Texas Health Sciences Center at Houston and Memorial Hermann-Texas Medical Center, with mortality at 9% for MSU patients compared to 12% for EMS patients. In addition, for every 100 patients treated in an MSU rather than a standard ambulance, 27 would have less final disability and 11 more would be disability-free, according to Dr. James Grotta, one of three co-primary authors on the study, director of stroke research at the Clinical Institute for Research and Innovation at Memorial Hermann-TMC, and founder and director of the Houston Mobile Stroke Unit Consortium.

Of patients eligible for the clot-busting tissue plasminogen activator (tPA) treatment, 97% were treated on the MSU compared to standard management where the patients was not treated until after they were evaluated in the emergency room (80%). MSUs include CT scanners and are staffed with paramedics, a CT technologist, a critical care nurse and a neurologist who is available either in person or via telemedicine.

Run from 2014 to 2020, the trial assessed more than 1,500 people and expanded across the country to the University of Tennessee in Memphis, New York Presbyterian (Weill Cornell and Columbia University), Indiana University Health, Sutter Health in California, University of California-Los Angeles, and University of Colorado-Anschutz Campus in Aurora and Colorado Springs. The Houston Fire Department, other local fire departments and Texas Medical Center hospitals were also partners.

While costly to equip and staff, Grotta says MSUs reduce treatment time and more widespread deployment could play a major role in public health for lowering disability due to stroke, as well as downstream utilization of long-term care. "Operating an MSU is not difficult and once up and running can go very smoothly. But it requires planning."

This, he says, includes dedicated personnel to work with EMS and hospitals; money to finance MSUs and billing system for operating costs; collaborations with various EMS agencies and stroke centers to optimize utilization and community involvement; and a big enough population of patients to justify the need for the vehicle; and the inclusion of MSUs in stroke treatment guidelines for appropriate reimbursement.

A study earlier this year in Berlin also showed a greater likelihood of survival and a reduced chance of long-term disability. By being treated in a STEMO (Stroke-Einsatz-Mobile), the odds of incurring significant in disabilities three months following stroke dropped by 29%. Death rates were also lower, as was the chance of stroke-related impairments in day-to-day functioning. Thrombolysis was received more, and scores for quality-of-life measures were higher.

Despite these positives, a lack of any established means for reimbursing MSUs, especially for CT scans and medication administered outside hospital, makes these programs financially challenging to sustain and is the reason why such units are often unavailable in many areas, according to the American Stroke Association’s International Stroke Conference 2021.

A comparison of healthcare resource utilization is underway, says Grotta.