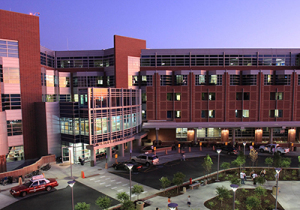 A second victim sustained minor injuries in the accident.

"From myself and our team, our hearts, our prayers, our tears are with the family that has been impacted by this event," said Alison Flynn Gaffney, executive director of the hospital systems planning and service lines, according to NBC affiliate in Salt Lake City, KSL News. "We are sorry that this had happened today"

The local news outlet reported that officials said the accident happened at a loading dock just north of the School of Medicine around 11am Although few specific details have been made public, an investigation is ongoing.

Gaffney said the average MR weighs 20,000 pounds. Moving the machine, Gaffney said, was an “outside event,” involving “infrastructure and scaffolding” and “multiple safety components," according to ABC4. She added that it is unclear what caused the deadly incident.

"This was meant to be a milestone occasion for our team, and something that has been in the works for several years ... We will work [with] all parties involved to understand what happened and identify the root cause, but our immediate concern is supporting all those affected," Gaffney said.

A Salt Lake City Fire Department hazmat crew responded to the scene but had cleared the area by about 2pm, according to the Salt Lake Tribune. The Utah Occupational Safety and Health Division is investigating, an official with the Utah Labor Commission said.

Additional details about either victim were not immediately released.