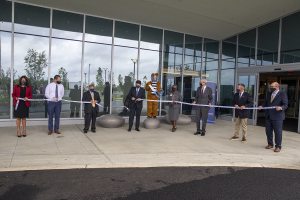 The 300,000 square-foot facility known as Penn State Health Hampden Medical Center has been three years in the making and will offer 24/7 emergency and medical imaging and lab services, as well as surgical care. It will also begin offering women’s health and labor and delivery services at a later point, reports ABC 27 News.

It is expected to be a source of care for West Shore residents of the Harrisburg area, primarily those in Cumberland and Perry counties, as well as the broader Capital Region, alongside Penn State Holy Spirit Medical Center, according to Penn Live.

The hospital will provide both in-patient and out-patient services, 48 in-patient medical and surgical beds, a state-of-the-art labor and delivery center and 12 ICU beds. It will have 34-beds available upon opening. Care will be carried out by Penn State Health faculty physicians, Penn State Health community practice providers and independent community providers. The organization has already hired 300 workers, and plans to increase that number to 950 in the next 12 months, according to Becker’s Hospital Review.

The opening follows an agreement struck between Penn State Health and Siemens back in June that will see the replacement of 70% of the healthcare system’s diagnostic and image-guided therapy systems for its inpatient and outpatient settings over the next five years. The new equipment will help its radiology, radiation oncology and cardiology workforce.

The Hampden Medical Center is the fifth hospital in Penn State’s network. A sixth in Lancaster County is under construction and is scheduled to open in 2022. Both are part of the organization’s objective to establish access to an acute care hospital within 30 minutes of each community it serves, according to Penn Live.