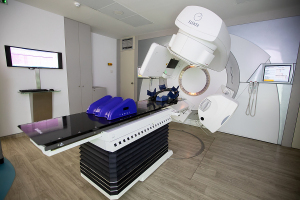 SBRT may help eradicate tumors that are resistant to systemic therapy in patients with oligoprogressive forms of cancer
Systemic therapy can sometimes receive mixed responses, with some metastatic sites suppressed and others resistant. Researchers at Memorial Sloan Kettering Cancer Center in New York said this week at the American Society for Radiation Oncology annual conference that high-dose radiation therapy may help thwart tumor growth in these areas that show no response, and expand progression-free survival.

Providers often switch to a different targeted therapy or chemotherapy when systemic treatment fails. But alternate drugs may cause side effects or not be available. The team behind the study applied stereotactic body radiation therapy (SBRT), which spares healthy tissue while delivering precise, high doses of radiation directly to tumors, in patients with oligoprogressive, metastatic lung and breast cancer. While no difference was found among breast cancer patients, lung cancer patients treated with SBRT had a progression-free survival rate of 44 weeks, compared to nine for those who received standard therapy.

The study is the first randomized trial to test the use of SBRT to treat oligoprogressive, metastatic lung and breast cancer, according to lead author Dr. C. Jillian Tsai, a radiation oncologist and director of metastatic disease radiation oncology research at Memorial Sloan Kettering Cancer Center. "SBRT (or any radiation) is not meant to directly compare or replace systemic therapy. It is aimed to work with and compliment systemic therapy to prolong disease control. The delivery of SBRT is usually done within a short period of time, typically within a week, so there is minimal interruption of systemic therapy," she told HCB News.

Tsai and her colleagues assessed 106 patients, 59 who had non-small-cell lung cancer and 47 with breast cancer. Participants had between one and five progressing metastatic sites that systemic therapy failed to treat, with 75% having more than one oligoprogessive site. Half received SBRT to all progressive sites, and half were treated with the standard of care.

After a median of 45 weeks, 78 (74%) showed further tumor progression and 39 (37%) had died. While those with NSCLC saw expanded progression-free survival with SBRT, no difference was found in those with breast cancer (18 weeks with SBRT versus 19 weeks with standard care).

This, according to Tsai, could be due to the use of different systemic agents for lung cancer, compared to breast; the stages of the breast cancer patients in the trial being too advanced for SBRT to help; or the very likely scenario that breast cancer and lung cancer respond differently. She and her colleagues are studying the reasons behind this now. They are also closing the trial early following a planned interim analysis that established that SBRT can extend the length of time that a patient’s tumors remain stable.
1(current)
2