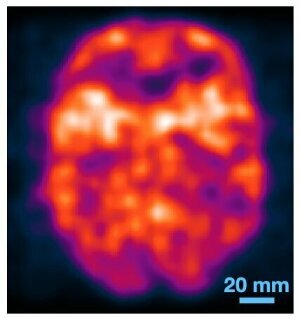 While useful in reconstructing images from CT and PET scans, tomography can expose patients to significant amounts of radiation and slow down the speed at which scans are produced. With the new approach, radiologists can create images more quickly, potentially in real time when performing PET scans, because there is no after-the-fact reconstruction required, said Simon Cherry, professor of biomedical engineering and radiology at the University of California, Davis.

In a paper he wrote with his colleagues on the technique, Cherry says they expect the approach to make medical scanning cheaper, easier and more accurate. It relies on new, ultrafast photon detectors developed at Hamamatsu Photonics in Japan.

“When this approach can be scaled up, there is the potential for significant improvements in image quality, because more information about each gamma ray is now available and no mathematical image reconstruction is needed to create an image,” said Cherry. “Another alternative, rather than getting better images, is to get images with reduced radiation dose, or much faster (possibly even real-time nuclear medicine imaging). The approach also could lead to more compact, lower cost imaging systems.” 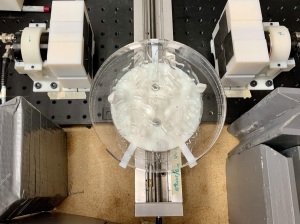 In PET imaging, radioactive isotopes decay and emit positrons. When these positrons come into contact with electrons in the body, they annihilate each other and emit two annihilation photons. Being able to trace the origin and trajectory of these photons theoretically creates an image of tissues. But detectors are too slow to track the photons, which prevents PET scans from capturing the full amount of data when it’s immediately available.

The researchers designed the new detectors to detect these photons (called Cherenkov photons) with an average timing precision of 32 picoseconds. This allows them to determine where the photons were created with a spatial precision of 4.8 millimeters. This, according to Cherry, is “literally imaging at the speed of light,” which allows users to produce cross-sectional images without tomography.
1(current)
2