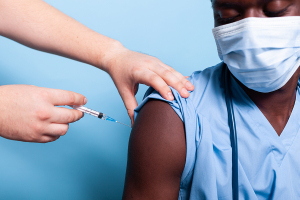 The calculation comes from a CDC assessment of more than 2,000 hospitals, with data from 3.3 million HCPs. Rates were highest among HCPs in children’s hospitals and metropolitan cities. It is the most comprehensive assessment of vaccine rates among U.S. hospital personnel to date.

While initially rising from 36% to 60% between January and April, vaccination rates slowed, rising by just 5% between April and August and then another 5% from August to September. By this time, 70% of HCP were covered. The increased rate of vaccinations could be due to a rise in COVID-19 rates associated with the Delta variant or mandates implemented by providers, said the researchers.

Hannah Reses, an epidemiologist in the CDC's division of healthcare quality promotion and the paper’s lead author, told HCB News that there may be multiple reasons that have made HCPs hesitant to get the vaccine. “Recent studies conducted to understand factors driving vaccine hesitancy among healthcare personnel have identified the following reasons for choosing not to be vaccinated: concerns about COVID-19 vaccine efficacy; adverse reactions after vaccination; the speed of vaccine development; and lack of trust in regulatory authorities and the government.”

Out of 5,085 providers who voluntarily submitted data on coverage between January and September, 2,086 met the criteria for the study. Vaccination rates were assessed by hospital type and characteristics of the county in which hospitals were located. HCPs in children’s hospitals had the highest vaccination coverage at 77%, followed by 70.1% in short-term ACH, 68.8% in long-term ACH; and 64% in critical access hospitals. Those in facilities in metropolitan counties had the highest vaccination rates (71%), compared to 65.1% in rural counties and 63.3% in non-metropolitan rural counties.

While the current study did not address the vaccination disparity between metropolitan and rural areas, Reses says other studies have shown that lower vaccination coverage may be due to a greater lack of health insurance in rural areas, as well as limited access to healthcare facilities, higher rates of comorbidities and disabilities. This refers to healthcare personnel as well, since vaccination rates among them are generally similar to the general public. Additionally, misinformation about vaccines can play a role in lower coverage.

“The findings of this study suggest that additional efforts, like vaccine mandates and investments in educational and promotional activities, may be needed to help increase vaccine coverage among healthcare personnel to better protect public health,” said Reses.

CMS recently mandated that all healthcare personnel at facilities participating in Medicare and Medicaid programs get fully vaccinated by January 4. The decision affects more than 17 million workers in hospitals and other healthcare settings across the U.S. and expands on a previous decision back in August that required staff within more than 15,000 Medicare and Medicaid-participating nursing homes to be vaccinated.

The findings were published in the American Journal of Infection Control.