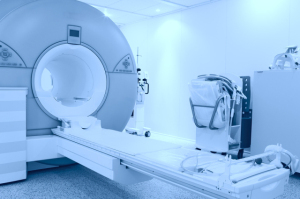 The prototype is equipped with a compact two-pole 0.055T permanent samarium-cobalt (SmCo) magnet and can be plugged into a standard AC power outlet. Its dimensions are 95.2 x 70.6 x 49.7 cm, and the bore is 29 x 70 cm. Its footprint is approximately two square meters, and it is meant to be a permanent magnet-based, low-cost, low-noise, low-power and shielding-free ULF brain MR scanner, according to Physics World.

The motivation behind the design was the fact that approximately 70% of the world’s population has little or no access to high-field superconducting MRs, which are expensive not just in cost but in installation and maintenance. The team estimates that their machine can be built in quantity with material costs under $20,000.

Additionally, roughly 30% of clinical MR cases involve the brain. This also pushed the researchers to build a ULF brain MR, because there is a great need for such imaging in the diagnosis and prognosis of various neurological diseases and injuries. "The goal is to develop methodologies for such ULF scanners to perform many routine yet clinically useful neuroimaging protocols, so as to fulfill the unmet clinical needs in point-of-care situations and/or developing countries," senior author Ed X. Wu, Lam Woo Professor in the laboratory of biomedical imaging and signal processing at Hong Kong University, told HCB News.

The scanner produces T1- and T2-weighted images, as well as FLAIR-like and diffusion-weighted ones. Researchers made sure of this by optimizing the machine's signal-to-noise ratios and contrast characteristics to be similar to those of clinical high-field MR images. This creates a high level of flexibility that can be used as the basis for development of future ULF MR protocols.

It also has a deep learning electromagnetic interference cancellation technique for modeling, predicting and removing external and internal EMI signals from MR signals, which eliminates the need for a traditional RF shielding cage. And the high temperature stability of SmCo removes the need to regulate magnet temperature to stabilize temperature-dependent fields.

A major advantage of using ULF is the fact that the scanner produces fewer artifacts when imaging implants, wrote Wu and his colleagues in their study. “In using ULF, metal implants not only exhibit fewer artifacts, but also experience significantly less mechanical force and RF-induced heating. The presence of paramagnetic (titanium and titanium alloys) and ferromagnetic (cobalt, nickel and associated alloys) materials in aneurysm clips and cerebrovascular stents did not induce gross artifacts.”

The researchers tested the scanner on phantoms and then imaged 25 patients with neurological conditions using the four protocols. Patients repeated the same exams on a 3T scanner. Exam time was approximately 30 minutes, on average, with the 0.055T system, compared to 20 minutes with the 3T scanner. A senior clinical radiologist found the prototype scanner detected most key pathologies in the exams of all 25 patients and produced similar image quality to that of the 3T scanner. Pathologies included brain tumors, chronic stroke and chronic intracerebral hemorrhages.

This is not to say that the scanner is meant to replace high-field MR, as the researchers say it is designed to complement such systems. “With a field strength that is almost two orders of magnitude lower than the mainstream MR, the image quality is inevitably less appealing simply due to the MR physics: lower field strength, weaker MR signal, less to play with,” Wu told Physics World. “However, MR signals and physics have many appealing properties at ultra-low-field, in terms of data acquisition and image formation.”

The findings were published in Nature Communications.