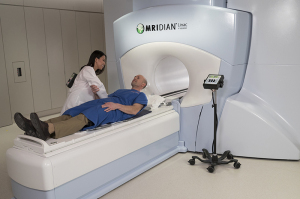 The findings are part of an interim analysis conducted during an ongoing Phase III randomized trial known as MIRAGE. Men undergoing SBRT for localized prostate cancer were randomly assigned to either CT-guidance or MR-guidance. Investigators assessed serious side effects or toxicities in both groups for 90 days following treatment and found those who underwent MR-guidance half as likely to experience treatment side effects.

When used with techniques such as high-dose stereotactic body radiotherapy, MR offers several theoretical advantages, including significantly reducing the need for planning margins in radiation. This is because the prostate and critical structures are more visible on MR than CT and because MR can perform real-time tracking to monitor the motion of the prostate

“This MRgRT platform obtains an MR four times a second and will 'turn off' the beam when the prostate moves outside of a preset boundary or margin. Because of these two features, we were able to significantly reduce the volume of tissue being targeted with radiation using MR-guidance. We hypothesized that this would in turn lead to less side effects,” Dr. Amar Kishan, vice chair of clinical and translational research in the departments of radiation oncology and urology at UCLA Health Jonsson Comprehensive Cancer Center, told HCB News.

Kishan and his colleagues estimated that they would need to enroll 300 patients to determine the benefits of MR-guidance but analyzed data after 100 patients were treated to see if fewer were needed. Of those 100, only 22% experienced symptoms of Grade 2 genitourinary toxicity, compared to 47% of CT-guided patients. Toxicities included frequent urination, burning sensation while urinating, bloody urine or urinary incontinence. In the CT-guided group, 14% suffered other toxicities such as diarrhea, discharge or rectal/abdominal pain to abdominal distention or obstruction. None in the MR group experienced these issues.

As a result, Kishan and his colleagues were able to cut their projected sample size in half and finished enrolling in the trial in October 2021. He says the final results will not be available until later in 2022 but that they are “extremely optimistic” based on what they have seen. “We did look at patient-reported outcomes (quality of life), and these were also significantly better one month after treatment for both urinary and bowel functions. This is an interim analysis, so in our final analysis we will be better able to definitely answer these questions. However, now that the trial has completed accrual, our policy at UCLA is to offer MRgRT for all candidates.”