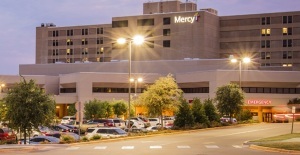 A local group known as “The Ekklesia of Oklahoma” protested outside the facility this month over COVID-19 protocols and later posted threats on social media that the hospital says escalated to violence against its staff.

In response, Mercy has ramped up security measures and is taking legal action, including seeking a restraining order against the group. An Oklahoma County judge granted it a temporary injunction against one member who made threatening Facebook posts that were believed to be violent in nature. The man was ordered to remove the posts and not post anything similar until a final ruling is made, reported ABC-affiliate, KOCO/Channel 5 News.

“There have been many baseless allegations and attacks online this past week about our hospital and coworkers. We have done our absolute best to respond with dignity and respect toward people with a difference of opinion, but we must defend our coworkers,” said the hospital in a statement.

The group is led by Pastor Daniel Navejas, who started the protests after a woman at his church requested doctors provide her husband with Budesonide for his COVID-19 symptoms. Primarily used to treat inflammatory conditions, such as Crohn's disease, the National Institute for Health and Care Excellence said in December that the drug should no longer be used to treat the virus after studies showed no significant positive impact on patient outcomes. Doctors refused her request. Her husband later died.

Navejas has held multiple protests outside the hospital, says Mercy, with attendees waving signs that said, “Mercy loves money more than people.” The group also falsely claimed that the hospital has a “Fauci protocol” and only treats COVID-19 patients with medications and treatments that it receives vouchers for from the government, reported the Black Wall Street Times.

The hospital says the group has also attacked it on social media, calling its physicians murders and Nazis. One follower even posted the home address for a physician. "For anyone to criticize the integrity of those who sole purpose is saving lives, let alone accusing them of murder or financially benefiting from deaths of patients is patently false, it's highly offensive to us, and should absolutely be condemned," Jean Hausheer of the Healthier Oklahoma Coalition COVID-19 Task Force, told KOCO.

On social media, Navejas has called the hospital an “evil Marxist control death camp” and has said that Mercy was “willing to kill people … for a dollar bill,” according to the Black Wall Street Times. He also claims to be the Oklahoma GOP chair for the 3rd Congressional District and has threatened to file charges for murder against the hospital, despite not having the legal authority to do so. He wrote on social media that neither he nor his organization condone violence.

Several protesters were arrested for blocking patient entrances. In addition to locking down its ICU until further notice, Mercy has also ensured a 24/7 security presence at its emergency room entrance and encourages staff to report concerns or suspicious activities to authorities. “There is truly nothing more important to us than your safety,” it wrote in a letter to employees on Monday.

The Ekklesia of Oklahoma is currently working to raise $20,000 in donations to afford a lawyer for the family of the deceased man.

Another hearing for the case is set for March 9.