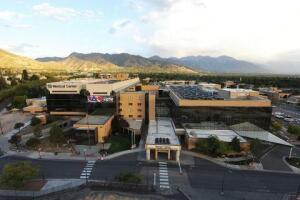 Aaron Kirschner, 48, of Cedar City, faces two counts of interstate threats and one count of cyberstalking after allegedly making threats over the phone to employees at George E. Wahlen Department of Veterans Affairs Medical Center. He called the facility approximately 609 times between March 24 and March 27 with the intent to annoy and harass staff until his demands were met, according to a complaint filed in the U.S. District Court. It did not state if the demands were met.

In a Facebook post on March 29, the St. George Clinic announced it was temporarily shutting down operations out of fear for the safety of its staff, according to The Salt Lake City Tribune. A spokesperson for the facility would not disclose to the paper if the shutdown was in relation to the threats. It reopened on March 31. “Out of an abundance of caution, VA Salt Lake City Health Care System was forced to close the St. George Clinic due to threats made against Veterans and our staff. All impacted veterans will be rescheduled or, when appropriate, offered virtual appointments. In the meantime, VA Police are working closely with authorities to mitigate the situation."

Investigators say Kirschner used his computer to make the calls to Wahlen Medical Center. He told three witnesses about the calls and said he was using virtual phone numbers to occupy as many as five phone lines at once to annoy and harass staff until his demands were met.

Five VA employees identified Kirschner from his voice and by the phone number he was calling from. They suffered substantial emotional distress from his calls, according to Fox 13 News.

“Kirschner made the following threats over the telephone: ‘tell [administrator] she is a dead woman’; ‘I am in the lobby of the main building, I am looking at the Utah campus, I’m not going home, nobody is going home'; ‘You are going to die, nobody is going home today. You think I am joking but am not’,” read the charges.

He was also charged in early March with electronic communications harassment and was scheduled to appear in court at the time of his arrest in relation to the threats, according to CBS-affiliate KUTV/Channel 2 News.
1(current)
2