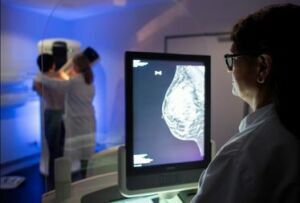 DBT and 2D mammography together may more frequently locate tumors than 2D alone. (Photo courtesy of University of Munster)
A phase I trial in Germany of almost 100,000 women has determined that a combination of digital breast tomosynthesis and standard mammography detects breast cancer more often than mammo alone.

Due to the fact that DBT reduces the chances of overlapping and dense breast tissue masking the presence of tumors, it is assumed that combining it with standard mammography enhances accurate detection of lesions than relying solely on mammography.

Researchers at the Clinic for Radiology at the University of Munster screened the women at 17 study centers in the states of North Rhine-Westphalia and Lower Saxony as part of the ToSyMa study. Their findings, they say, confirm this assumption. “It is only their [the women’s] participation that enables meaningful research to be carried out, and our thanks also go to the German Research Foundation with their funding for this large-scale, randomized diagnostic superiority study,” said Prof. Walter Heindel, director of the radiology department at Münster University Hospital (UKM), as principle investigator and the project manager Prof. Stefanie Weigel, in a statement.

During screening, 99,689 patients between 50 and 69 were allocated at random into either a group that received standard mammography alone or another that received it along with DBT. The researchers assessed detection rates among each group for invasive breast cancer.

Using a computer program, comparisons were calculated and showed that 354 of 49,715 women had invasive breast cancers in the DBT and 2D group. For those who received standard mammography alone, 240 of 49,762 had cancer. This put the detection rate at 7 to 1 cases per 1000 women screened. Adverse events and device deficiencies were rare. No serious adverse events were reported.

The results align with those of past studies. In 2018, Swedish researchers found that DBT detected 34% more cancers than 2D mammography in 15,000 patients over five years. They also found that the solution reduced breast compression, making the exam more comfortable for the women.

Another at the University of Pennsylvania in 2020 demonstrated the long-term advantages of DBT, with almost a third of cancers detected with the technique connected to poorer prognosis, compared to a quarter of those found with DM alone. The researchers examined the outcomes of patients from over a five year period from more than 56,000 DBT exams and 10,500 prior DMs, making it the longest follow-up trial to date. Cancer detection rates of 6 per 1,000 for DBT and 5.1 per 1,000 for DM alone.

The findings in Pennsylvania were significant, because most published data only looked at DBT and DM in the first round of screening and did not convey much information about DBT over time.

For the research at the University of Munster, The German Research Foundation (DFG) will fund a follow-up Phase II study until 2025 for more than 1.6 million euros. Included will be an assessment of the ability of DBT and standard mammography to detect invasive interval cancers at 24 months for each patient. It also will examine if the increase in breast cancer diagnoses improves health in women.

The findings were published The Lancet Oncology.