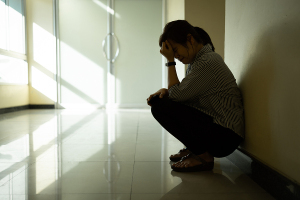 A nurse's suicide in California has raised concerns about mental health among nurses.
A California nurse took her own life on April 29 at Kaiser’s Santa Clara Medical Center.

The nurse, who has not been identified, had a loaded gun and was halfway through a shift that Wednesday night in the emergency room when they committed suicide. Medical personnel in the hospital said that the tragic event took place in a supply room and in front of a coworker. While no name was given, the Independent reported that the nurse was female.

The ER remained open for walk-in patients, but ambulances were diverted to nearby hospitals while Kaiser conducted an investigation, according to the San Francisco Chronicle. "Our hearts go out to the family, friends and co-workers affected by this terrible loss. Our teams are on site providing emotional support and resources for staff. We are grateful to our employees and physicians who responded immediately and for the compassionate outpouring of support our Santa Clara team is receiving from colleagues at Kaiser Permanente and other healthcare systems,” Dr. Rakesh Chaudhary, physician-in-chief at Kaiser Permanente Santa Clara Medical Center, said in a statement.

While the motivation for the shooting remains unclear, the incident has raised concerns about the availability of mental health resources for nurses, who have been overwhelmed physically, mentally and emotionally by the pandemic. A recent study by the CDC found that over 70% of healthcare workers have anxiety and depression, 38% suffer from PTSD, and 15% have recently thought about suicide and self-harm.

Suicide was also high among nurses even before the pandemic, with a 2019 study showing that male nurses were 41% more likely than members of the general public to kill themselves and that female nurses had a nearly 58% higher chance of doing the same.

Additionally, the pandemic has caused many nurses to switch careers and seasoned veterans to retire early, pushing the onus on those remaining. The suicide at Kaiser coincided with a strike orchestrated the same week by 5,000 nurses at Stanford Health Care and Lucile Packard Children’s hospital in San Francisco, reported ABC7 News.
1(current)
2