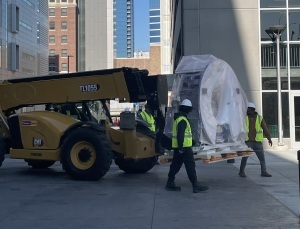 The total body scanner, the first of its kind in Michigan, cost between $15-$20 million and is one of the final pieces of equipment BAMF Health needs before it can begin treating patients from around the country.

“We can shorten a 40-minute scan to one minute,” founder and CEO Dr. Anthony Chang told MLive.com. "This is a powerful, powerful diagnostic tool."

uEXPLORER is the first and only 3D imaging system capable of imaging the entire human body in a single scan. It performs two-meter scanning in one acquisition in 30 to 240 seconds, and quickly and continuously tracks tracer distribution in blood, organs and tissues.

In a statement, Jeffrey Bundy, CEO of United Imaging Healthcare Solutions, described the installation as "a milestone and a win for patients above all else."

BAMF Health will initially use the scanner to diagnose and treat prostate cancer and neuroendocrine tumors, but plans to eventually apply it to other types of cancer, as well as heart-related diseases and neurological disorders such as Alzheimer’s and Parkinson’s. 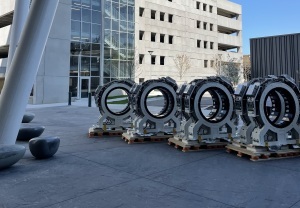 BAMF Health is creating the first theranostics clinic with a total-body PET/CT scanner. (Photo courtesy of United Imaging)
The first uEXPLORER total body PET/CT system was installed in 2019 at UC Davis where researchers used it for the first time to stage a 49-year-old woman’s lymphoma. With a single scan, the researchers were able to see if the disease had spread beyond the tumor site.

In addition to uEXPLORER, the theranostics center will install a uPMR 790 PET/MR system from United Imaging. It comprises next-generation silicon photomultiplier-based HD TOF (time of flight) for heightened sensitivity and spatial resolution; 32-cm axial field of view; and 3T MR with the United Compressed Sensing platform, which reduces acquisition time and speeds up scanning.

BAMF Health is one of several tenants that will eventually occupy the Douglas Meijer Medical Innovation Building, which was created with the goal of bringing to market discoveries in the fields of cancer research, Alzheimer’s and Parkinson’s diseases, artificial intelligence and medical device development.

Douglas Meijer, whose family founded the Meijer grocery store chain, is a prostate cancer survivor, and a supporter of BAMF Health. According to MLive, he and the Meijer Foundation donated $19.5 million to Michigan State University to help open the Douglas Meijer Medical Innovation Building and to purchase equipment for BAMF Health.