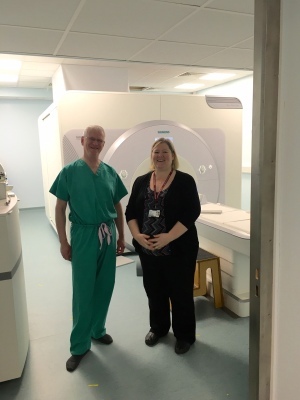 Researchers at the University of Cambridge’s Wolfson Brain Imaging Centre used the scanner to identify Parkinson's and progressive supranuclear palsy (PSP) patients who endured damage to their locus coeruleus, a tiny part of the brain that produces noradrenaline, which helps with brain functioning such as attention, arousal, thinking and motivation.

In a study last year, they found certain PSP patients had lost as much as 90% of their locus coeruleus and surmised that noradrenaline boosters could help alleviate symptoms in these specific patients.

Many companies produce these drugs, which have been approved for similar uses. Unfortunately, 3T and lower magnetic field MR systems are unable to show the locus coeruleus of living patients on scans, making it impossible to identify patients with damage there.

The locus coeruleus produces noradrenaline, a chemical that helps with brain functioning. (Photo courtesy of University of Cambridge)
Co-lead author professor James Rowe, from the university's department of clinical neurosciences, told HCB News that 7T may solve the problem because of its higher resolution. "The locus coeruleus is also the first part of the brain to be damaged by Alzheimer's disease, and as well as being among the most sensitive regions to Parkinson's and PSP. So, the ability to detect individual impact of the disease as a guide to treatment is of importance to many people. The locus coeruleus is also an important factor in ageing - and how to stay cognitively well as one gets older."

In addition to seeing the locus coeruleus, the scientists confirmed that the greater damage there, the more apathetic patients are and the worse they score on cognitive tests.

They have since started a clinical trial to see if nonadrenaline drugs can alleviate PSP symptoms. Rowe says being able to assess the locus coeruleus could help prevent wasteful spending on noradrenaline boosters for those who would not benefit.

"Several of the 7T scanners have regulatory approval for clinical use. But, what we now need is the evidence that noradrenergic drugs work in long-term treatment (from clinical trials) and evidence that the MR selection method improves the outcome in trials. This is ongoing work, for AD, PD and PSP, and would be a major step towards individualized or precision medicine - making individualized treatment decisions based on that persons unique illness," said Rowe.

The findings were published in Movement Disorders.