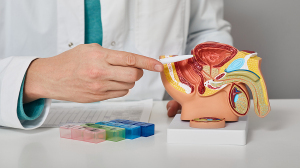 Intermediate risk prostate cancer consists of small tumors confined to one area of the prostate. Known as MR-guided focused ultrasound (MRgFUS), the approach is a form of focal therapy (partial gland ablation). Under anesthesia, patients undergo MR scanning, which doctors use to outline the treatment area. They then apply focused ultrasound waves that are guided by MR imaging and intersect from different directions to heat up and destroy the cancer cells.

This not only reduces persistent side effects, like urinary and sexual problems that can impede quality of life, but effectively controls the disease in patients, according to researchers at Memorial Sloan Kettering Cancer Center.

They say a phase II clinical trial they conducted proves these benefits are possible in many patients. “While you are imaging, you are getting temperature feedback as well, to make sure the right spots are being treated. The patient wakes up from the anesthesia and goes home. There are no incisions or wounds on the body to heal. We have demonstrated the procedure is safe for patients, and they can return to normal activity right away,” said MSK urologic cancer surgeon Dr. Behfar Ehdaie, who led the trial, in a statement.

In the study, 101 men received MRgFUS treatment and were biopsied six months and 24 months later. No intermediate- or higher-risk cancer was found in the treated areas for 88%.

As a result, the FDA approved the technology, known as Exablate Prostate, in December 2021 to treat prostate tissue. It also greenlighted an investigator-initiated trial designed by Ehdaie and surgeon Peter Scardino to find and compare the clinical benefits of MRgFUS focal therapy to active surveillance (another traditional treatment option).

“Probably most important was the lack of side effects,” said Ehdaie. “Nobody in the study reported urinary incontinence or experienced bowel problems. Most men were able to achieve erections.”

The findings were published in Lancet Oncology.