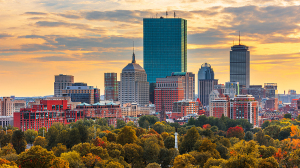 Despite not facing a COVID surge, Mass General Brigham, in Boston, reported a $120 million operating loss in the quarter ending in June. The same period last year saw it gain $128 million, according to The Boston Globe.

And Beth Israel Lahey Health, in Cambridge, had a $60.5 million operating loss, compared to a $59.9 million gain the year before.

These losses have raised concerns for smaller and independent hospitals, which have fewer resources. “Hospitals that are not part of systems, that don’t have large reserves, and hospitals that are far flung from a major metropolitan community are at risk,” Ellen Murphy, president of a hospital consulting firm, Murphy Meehan Strategies, told The Boston Globe.

The lack of COVID surges, which cut revenue with the shutdown of elective surgeries, highlights the deep impact of costs for temporary staffing and nurses in the midst of the ongoing labor shortages.

Discharges have also slowed, because of less availability at skilled nursing and rehab facilities, which have their own staffing issues. Mass General Brigham said its discharges dropped five percent, offsetting revenue gains in other areas.

Additionally, patients who delayed care during the pandemic are now coming in sicker and staying longer, with providers struggling to find the capacity to care for them.

Many had hoped for a boost from a proposed economic development bill that would have provided them with hundreds of millions of dollars. But state lawmakers ended formal sessions on August 1 without passing the bill.

To save more, MGB has reduced spending and budgets in administrative areas, including by not filling vacancies, and has consolidated vendors for lower supply costs. It also is looking to partner with skilled nursing and rehab centers to move patients to, and expand its home health program to increase in-patient capacity.

Beth Israel Lahey Health says salary and benefit costs surpassed $1.1 billion, an 11.5% increase compared to last year. It is scaling recruitment and investing in training to fill vacancies, while trying to increase its volume.

MGB chief financial officer Niyum Gandhi says hospitals also should plan for potential COVID-19 surges in the future. “We have to, as a society, plan for the capacity of pandemic-related surges. We have not done that.”