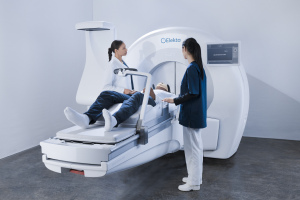 From the October 2022 issue of HealthCare Business News magazine

In radiation therapy, planning precise treatments continues to be the goal. With that in mind, manufacturers are moving forward with equipment and software improvements to make cancer treatment more targeted.

Companies are also continuing to research Flash therapy, which delivers ultrahigh doses of radiation in less than a second in order to spare healthy surrounding tissue.

Here's a look at what's new and what’s next in both proton therapy and radiation therapy.

Hitachi Proton
In June, University of Wisconsin Health (UW Health) selected Hitachi to provide the infrastructure to support proton therapy at the new UW Health Eastpark Medical Center in Madison, Wisconsin. The system is equipped with advanced technologies such as spot scanning irradiation technology, which allows the proton beam to be delivered according to the shape of the cancer, a 360-degree rotating gantry with cone-beam CT for high-precision positioning and Real-time image Gated Proton Therapy (RGPT).

Hitachi will also provide an upright proton therapy solution in collaboration with Leo Cancer Care. With the upright treatment approach, the patient is in a natural, seated position on a specially-designed chair that moves the patient in front of a static proton beam. This approach may also break down many traditional barriers to proton treatment.

In November 2021, Hitachi Proton announced that it been selected by the University of Tsukuba in Japan to design, construct and maintain a new proton therapy center. The new center will be equipped with Hitachi's compact design proton therapy system, including one accelerator and two rotating gantry treatment rooms.

This is the first time in Japan that a particle therapy system provider received a second unit order from an existing facility, according to the company. After 20 years of operation of the original University of Tsukuba proton therapy center, Hitachi will continue its relationship with the university with a further 20-year period of operations and maintenance support after the expected start of patient treatment around the summer of 2025.

Also in Japan, Shonan Kamakura Advanced Medical Center at Shonan Kamakura General Hospital of Tokushukai Medical Group, began treating patients with Hitachi's compact proton therapy system in January 2022. Hitachi developed the system, which reduces its footprint to about 70% of the room of a conventional solution, in response to a growing demand for smaller proton therapy systems.
1(current)
2
3
4
5
6
7
8
9 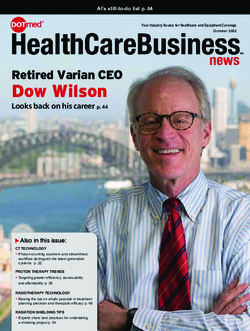