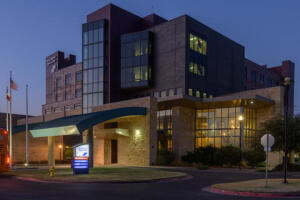 Macus McCowan Jr., 18, was arrested on October 3 after nurses called 911, saying that he was choking an infant. At the time, he was at the hospital with his girlfriend, who was in labor. Staff described his behavior as “odd and unreasonable,” saying that he was yelling and screaming, according to ABC-affiliate, KAMC.

After he grabbed a nurse’s arm and made an "unintelligible statement," he was asked to leave but instead ran back and forth in the hall before charging three nurses in an alleged attempt to break into the nursery.

He was unable to and instead grabbed a newborn in a carrier from its mother and went into the lactation room. A nurse who followed him said he put his hands around the baby’s neck and tried to strangle it. The infant’s face reportedly turned color from the lack of oxygen. The nurse and her co-workers intervened and had McCowan removed from the room.

He then managed to successfully force his way into the nursery, where he grabbed a baby girl by her neck and began shaking her. The baby’s face turned blue said respiratory therapist Martha Fuentes, who saw McCowan strangling her, while saying "die," according to The New York Post He then made a move as if he was going to throw her to the ground.

Fuentes attempted to slowly pull McCowan to the floor, so as not to hurt the baby. She stayed with them, protecting the child’s head until police arrived.

Officers briefly fought with McCowan, who tried to resist arrest. While being escorted out of the building, he attempted two times to take an officer’s gun from his holster but was unsuccessful.

"I want to express my sincere gratitude to those who responded to the incident last evening, especially our nurses, therapists and security team who worked diligently to protect innocent babies and others,” Odessa Regional Medical Center president Stacey Brown told NewsWest9.

She continued that the hospital “is now focused on caring for and supporting those who were impacted by this, including our patients, their families, and our staff."

Along with attempted capital murder, McCowan faces charges of assault, assault of a public servant, resisting arrest, attempting to take a weapon from an officer, criminal trespass and possession of a controlled substance (Police found a THC vape pen on him).

As of October 4, he remained in the Ector County Law Enforcement Center, with no bond yet set.