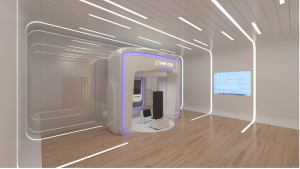 The FIT system is equipped with HYPERSCAN Pencil Beam Scanning technology for intensity modulated proton therapy and dual-energy large bore diagnostic CT at treatment position for image-guided radiation therapy and adaptive therapy. It also can be utilized in research for FLASH therapy and facilitates access to emerging technologies such as ARC therapy.

FIT refers to Fast deployment of an Integrated design and bringing the Transforming power of proton therapy to more cancer centers. The scanner’s compact size will further decrease the costs and complexity of proton therapy, according to Mevion.

"Despite its benefits, access to proton therapy has remained limited due to the cost, size, and equipment complexity. The MEVION S250-FIT is the only proton system that will be able to replace an existing radiation therapy machine, greatly reducing the cost and complexity of deploying proton therapy," Lionel Bouchet, senior VP of commercial development at Mevion Medical System, told HCB News.

Mevion is the designer of the world’s smallest self-shielded proton accelerator, which is what allows the FIT system to be positioned inside LINAC vaults. The greater access it provides also extends to pediatric patients.

Leo Cancer Care, which leverages upright positioning in its proton therapy design, will work with Mevion to develop the FIT system. Its Marie particle therapy system scans and treats patients upright at all particle therapy-specific anatomical sites, allowing them to have a natural stance and direct eye-to-eye contact with care teams for better interaction.

The Marie Particle Therapy system is currently being installed at UW Health’s Eastpark Medical Center in Wisconsin and will be the company’s first solution installed in the U.S.

“In working with Mevion, we will be able to scale down proton therapy in size and cost so that it can be within reach of patients who will benefit from it most,” said Rock Mackie, board chairman and co-founder of Leo Cancer Care.

Mevion will officially debut the system on October 23 at the American Society of Radiation Oncology’s 64th Annual Meeting in San Antonio, Texas. The unveiling ceremony will take place at 2 p.m. CDT.

The MEVION S250-FIT Proton Therapy System, FLASH therapy, online adaptive therapy, and ARC therapy are not yet available for clinical use.