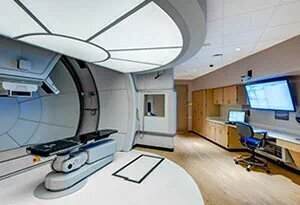 Delivering doses that are more than 300 times higher than conventional radiation, FLASH therapy takes less than a second and potentially reduces damage to normal surrounding tissue, while destroying cancer.

Researchers at Cincinnati Children's/University of Cincinnati Medical Center Proton Therapy Center and Varian, a Siemens Healthineers company, tested it on 10 adults with bone tumors in the arms and legs, finding that it reduced pain and potentially side effects associated with conventional radiation.

The study is the FAST-01 trial and was presented on October 3 at the American Society for Radiation Oncology (ASTRO) Annual Meeting in San Antonio, Texas.

The researchers say their research may lead to FLASH being used to treat more critical sites like the brain, lungs and gastrointestinal area.

“We need human data to see if there are any unexpected side effects. Treating arms and legs is not as risky as treating someone’s brain or lungs,” said Dr. John Breneman, FASTRO, principal trial investigator and medical director of UCMC’s Proton Therapy Center.

Preclinical animal trials suggest that proton therapy can be safely delivered in high doses with less harmful side effects.

The researchers used Varian’s ProBeam particle accelerator in the study. Treatment was applied to 12 metastatic sites. A single fraction had 8 Gy of radiation and was delivered at ≥40 Gy per second.

The researchers assessed pain, pain medications and adverse events on the day of treatment and at various points for over a year after. Seven patients experienced complete or partial pain relief, with pain relieved completely in six sites and partially in two others. Temporary pain flares were seen in four sites.

“We did not see any unexpected additional toxicity with the substantially shorter treatment,” said lead study author Dr. Emily Daugherty, an assistant professor of clinical radiation oncology at UCCC, in a statement.

While potentially useful in treating children, more research is required before this can be done. Researchers also need to completely determine why FLASH kills tumors with fewer side effects.

The team plans to test its safety and efficacy in patients with tumors closer to the lungs and heart, in the FAST-02 trial. Adult enrollment of patients with thoracic bone metastases is underway.