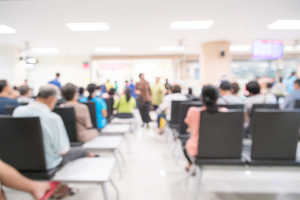 From assessing over five million discharge records from California hospitals, researchers at Penn State found that in crowded EDs, patients become sicker and are more likely to die.

While it is known that a lack of available inpatient beds leads to ED overcrowding, the study is the first to the authors' knowledge to show a correlation between crowding and problems throughout the hospital.

“We do not know for sure what causes the increase in deaths, but increased workload for the inpatient nurses and doctors seems to be one likely factor,” said Charleen Hsuan, assistant professor of health policy and administration, and lead author of the article, in a statement.

Records were from October 2015 to the end of 2017, and crowding was measured by counting the number of people in the ED. An average 2.6% of hospital patients died during inpatient stays.

While staffing levels, availability of inpatient beds and case complexity were not accounted for, prior research has shown that the number of people in the ED can be an effective proxy for all those factors.

Hsuan and her colleagues say that more research is required to understand the full scope and implications of the problem. The data was also just from California, one of the only states with a legal requirement for minimum staffing levels among nurses.

But the findings possibly indicate that the death rate may be even higher when an ED is crowded in states where nurse staffing is lower, says Hsuan. “When policymakers and hospital administrators think about this problem, they need to consider the impact on all patients and not just those in the emergency department. Policymakers may need to take a systems perspective on improving the quality of care in hospitals.”

Records from the smallest hospitals, patients younger than 20, and those transferred between hospitals were excluded.

The findings were published in Health Services Research.