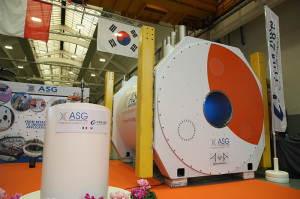 The solution will be used primarily for brain imaging research and is expected to be powerful enough to acquire images that are almost 10 times more detailed than those of 1.5T MR scanners.

"The ultra-high resolution brain images obtained from the 11.74T MR system are expected to provide significant clues for the early diagnosis and treatment of neuro-degenerative brain diseases such as Parkinson's disease, Alzheimer's and stroke,” said professor Woo-Kyung KIM, president of Gachon University Gil Medical Center (president of the Neuroscience Research Institute), in a statement.

Among its achievements was satisfying the three main criteria of the Site Acceptance Test in the first half of 2022. This includes having an internal temperature of <2.2 Kelvin, a magnetic field intensity of 2.2K, and magnetic field uniformity.

Technical managers of ASG and experts from Korea carried out the test. The evaluation committee confirmed the magnetic field reached the target field density and maintained stability and uniformity.

The magnet was manufactured in December 2018. The researchers plan to combine the 11.74T magnet with gradient magnetic coils, RF coils, electronic components and power supplies when they start using it.

The scanner is fully serviced by ASG technicians on site and is supported by a grant from the Korea Health Technology R&D Project through the Korea Health Industry Development Institute (KHIDI), funded by the Ministry of Health and Welfare, Korea.

Several MR systems more powerful than standard 1.5T and 3T scanners and even the top-end 7T scanners are in the works. In 2017, the Weizmann Institute of Science in Israel installed Bruker’s Biospec 15.2T USR preclinical ultrahigh-field MR system to give clinicians a better understanding of biomolecular processes of certain diseases, as well as advanced biomaterials that could potentially impact a variety of emerging diagnostic and therapeutic approaches.

"[This] instrument will enable new forms of multiplexed imaging not previously available to the institute, with the aim to develop, optimize and implement genetically engineered reporter systems for MR with artificial 'multicolor' characteristics," Dr. Amnon Bar-Shir of the department of organic chemistry at the institute, told HCB News at the time.