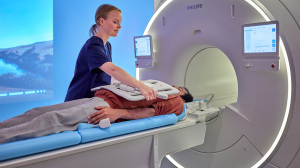 MR systems like the MR5300 are equipped with Philips' BlueSeal magnet technology and use only seven liters of helium. (Photo courtesy of Philips)
With a new research partner, Philips is hoping to rewrite the book on MR by imagining a future where the imaging modality's superconductive magnets can operate at higher temperatures — and without the need for liquid helium.

Such a magnet, if it were developed, could bring myriad benefits to healthcare.

Circumventing the need for liquid helium means reducing dependence on a finite natural resource, produced largely as a byproduct of fossil fuel (natural gas) extraction, and ultimately vented out into the atmosphere. Such a scanner would theoretically be smaller, lighter, and less expensive — making MR more accessible to underserved communities and pushing it closer to becoming a first line diagnostic tool.

MagCorp, a private company founded by Florida State University’s MagLab, part of the U.S. National High Magnetic Field Laboratory, is working with Philips on this endeavor.

“[MagLab] is home to many of the world’s leading researchers on novel superconducting materials that don’t require liquid helium temperatures to operate. Philips has decades of MR scanner design and development experience, including most recently the launch of the BlueSeal magnet technology,” Josh Hilderbrand, director, head of MRI Magnet Research and Development at Philips, told HCB News. “Combining these resources with MagCorp’s research facilitation services will help leverage the latest technology to accelerate access and availability of MR to more patients and healthcare providers.”

In 2018, Philips released its BlueSeal magnet technology for non-venting MR scanners that are charged with seven liters of helium only once when first set up and do not require additional helium throughout their operational life. It is available with the company’s Ingenia Ambition 1.5T and MR5300 systems.

The MagCorp partnership will focus on demonstrating the feasibility of superconducting materials capable of operating at higher temperatures than today’s niobium-based superconductors. Like helium, niobium is a scarce element, whereas some of the new materials being investigated are based on more abundant elements.

In addition to basic materials research, the team will investigate the steps needed to commercialize such materials, and the technologies needed to enable their use in future scanners.

“They will be able to fit in existing structures that may not have had the available floor space required for a traditional scanner," he said. "Maturation of many technologies leads to economies of scale, increasing affordability and, in return, creating more access."