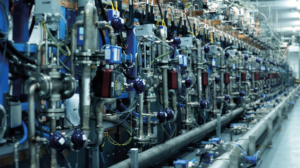 Advanced Oncotherapy will unveil and use the world's first proton linac, LIGHT in the second half of 2023 to treat patients. (Photo courtesy of AVO)
Radiotherapy provider Advanced Oncotherapy (AVO), in London, is set to debut the first proton linac system in the world for cancer therapy, using it to treat patients at University Hospitals Birmingham at Daresbury in the second half of 2023.

Called Linac Image-Guided Hadron Technology (LIGHT), the solution was developed over 20 years at CERN (European Organization for Nuclear Research) and AVO’s subsidiary ADAM, a spinoff from CERN that builds and tests linacs for medical purposes.

Designed with a proton beam that can deliver ultrahigh dose rates to deep-seated tumors, the linear accelerator produces an extremely focused beam of 70 to 230 MeV and can target tumors in 3D by adjusting the depth at which dose is delivered much faster than existing circular accelerators, reported the trade publication, the CERN Courier.

Its initial acceleration is to 5 MeV, and it reached its maximum of 230 MeV at the STFC Daresbury Laboratory in September 2022. Unlike conventional proton therapy systems, LIGHT does not require large construction designs for buildings, accelerators and gantry systems.

“The excitement comes from the fact that cost reduction can be accompanied with better medical outcomes due to the quality of the LIGHT beam, particularly for cancers that still have a low prognosis,” said AVO CEO Nicolas Serandour in a statement.

The initial acceleration is based on radio-frequency quadrupole (RFQ) technology developed at CERN and supported by CERN’s knowledge transfer group. A 16 meter-long prototype of the system was developed four years ago and tested at LHC Point 2.

Each module is controlled to adjust the beam energy electronically by 200 times per second, depending on the depth of the tumor layer. This removes the need for absorbers and degraders, significantly decreasing proton throughput and sparing patients unnecessary radiation. This also reduces the volume of shielding material required.

“Our mission is simple: democratize proton therapy,” says Serandour. “The only way to fulfill this goal is through the development of a different particle accelerator, and this is what we have achieved with the successful testing of the first-ever proton linear accelerator for medical purposes.”