Smokers May Have Genetic Variation That Keeps Them From Quitting 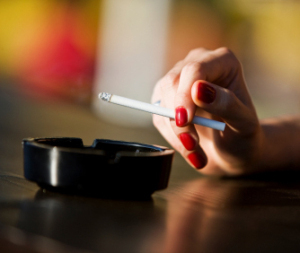 The regular smokers
had smoked at least
five cigarettes a
day for at least
the past five years.
ANN ARBOR, MI -- Anyone who has ever tried smoking probably remembers that first cigarette vividly. For some, it brought a wave of nausea or a nasty coughing fit. For others, those first puffs also came with a rush of pleasure or "buzz."

Now, a new study links those first experiences with smoking, and the likelihood that a person is currently a smoker, to a particular genetic variation. The finding may help explain the path that leads from that first cigarette to lifelong smoking.

The new finding also adds to growing suspicion surrounding the role of a particular nicotine-receptor gene in smoking-related behaviors and in lung cancer. Other researchers have already linked variations in the same genetic region to smokers' level of dependence on nicotine, to the number of cigarettes smoked per day and to a far higher risk of lung cancer - the worst outcome of a lifetime of smoking.

In a paper published online in the journal Addiction, a multi-university collaborative team of researchers specializing in statistical genetics, gene analysis, and trait analysis reports an association between a variant in the CHRNA5 nicotine receptor gene, initial smoking experiences, and current smoking patterns.

The genetic and smoking data come from 435 volunteers. Those who never smoked had tried at least one cigarette but no more than 100 cigarettes in their lives, and never formed a smoking habit. The regular smokers had smoked at least five cigarettes a day for at least the past five years.

The regular smokers in the study were far more likely than the never-smokers to have the less common rs16969968 form of the CHRNA5 gene, in which just one base-pair in the gene sequence was different from the more common form. This kind of genetic variation is called a single nucleotide polymorphism or SNP.

Smokers were also eight times as likely to report that their first cigarettes gave them a pleasurable buzz.

"It appears that for people who have a certain genetic makeup, the initial physical reaction to smoking can play a significant role in determining what happens next," says senior author and project leader, Ovide Pomerleau, a professor of psychiatry at the University of Michigan Medical School and founder of the U-M Nicotine Research Laboratory.

"If cigarette smoking is sustained, nicotine addiction can occur in a few days to a few months," he adds. "The finding of a genetic association with pleasurable early smoking experiences may help explain how people get addicted -- and, of course, once addicted, many will keep smoking for the rest of their lives."
1(current)
2