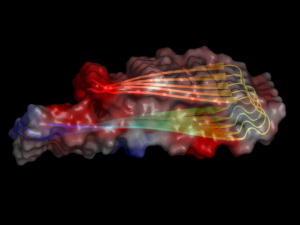 beta-amyloid
Using CMA microdialysis and catheters, scientists have sampled the fluid in between the cells in patients with dementia or brain injury and have studied the workings of a substance implicated in Alzheimer's disease, called beta-amyloid.

The research was performed not with Alzheimer's patients but with people suffering severe brain injuries since a brain injury increases the risk of developing dementia later in life.

"We have always believed that patients produced the beta-amyloid right after injury. Instead, we found that beta-amyloid levels increased as patients improved and dropped if they got worse," lead researcher, Dr. David Brody, a neurologist at Washington University in St Louis, reported in the journal Science.

Dr. Brody, who is assistant professor in the department of neurology at Washington University in St Louis, told DOTmed News "there is a lot we don't understand about the relationship between soluble amyloid beta (which we measured) and the plaques that are prominent in Alzheimer's disease brains (which we did not measure, since none of our patients had Alzheimer's disease)."

He says that beta-amyloid seems to be a marker of increased brain activity as patients improved after being injured.

"I am not at liberty to give details of our future intentions but we are interested in using microdialysis to study the effects of drugs and other therapeutics on amyloid-beta dynamics," Dr. Brody said.

While the work raises more questions than it answers, it brings researchers a valuable new tool for studying both Alzheimer's risk and just what happens during brain-injury surgery, he said.