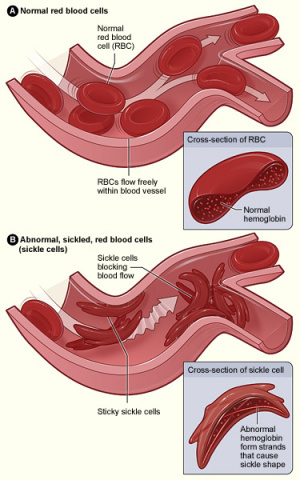 Sickle cells block blood flow
Screening with an ultrasound machine has proved highly successful in preventing stroke among children with sickle cell disease, by identifying children who are then preventively treated with blood transfusions.

Over an eight-year period at The Children's Hospital of Philadelphia, researchers found that the technique, transcranial Doppler ultrasonography (TCD), along with regular transfusions for children found to be at high risk, reduced stroke to 1/10th of the incidence found before TCD was introduced.

"We studied the impact of using TCD starting in 1998, when the technique became routine at our hospital and many other centers," said Janet L. Kwiatkowski, M.D., a pediatric hematologist at The Children's Hospital of Philadelphia.

Kwiatkowski presented her group's results earlier this week at a press conference during the 50th annual meeting of the American Society of Hematology.

Childhood stroke has long been known to be a devastating complication of sickle cell disease, an inherited condition in which abnormal hemoglobin deforms red blood cells into sickle-shaped bodies that do not pass smoothly through blood vessels.

TCD is a noninvasive tool that uses ultrasound waves to measure the speed of blood flow in large vessels in the brain. An abnormally high speed is a marker of a narrowed vessel, and a sign of high risk for stroke.

After the multicenter Stroke Prevention Trial in Sickle Cell Anemia showed in 1998 the utility of TCD in detecting abnormal blood speeds and the benefit of transfusions in reducing stroke risk, the Sickle Cell Program at Children's Hospital began to routinely use TCD in screening sickle cell patients.

"When we see an abnormal TCD result, we treat the child with preventive blood transfusions, given regularly every three to four weeks," said Kwiatkowski.

In contrast, the post-TCD group had two patients with overt stroke, six with other neurological events and one with an indeterminate event.

"The study confirmed that a program of TCD screening combined with regular transfusion therapy for children found to be at high risk of stroke is effective in preventing strokes," added Kwiatkowski.