This Month in Medical History - December: The last laugh 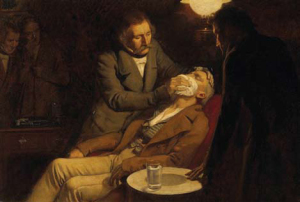 From appendix to teeth, if you've ever had to have one removed by a professional - then you should go through great pains to thank Horace Wells (1815-1848), a Hartford, Connecticut dentist.

On December 10, 1844, Wells and his wife, Elizabeth went out for a night of fun, visiting a traveling "laughing gas" show. At these shows, thrill-seekers would step up and put down their money to partake in the experience that is nitrous oxide.

Wells and an associate named Sam Cooley both gamely joined the festivities and inhaled some of the gas. After bumbling around for a bit to the amusement of onlookers, as is expected the effects soon wore off. It was then that Wells observed blood on the trousers of Cooley. His friend had apparently injured himself while staggering about "high" from the gas, but he hadn't felt any pain from his injury and in fact hadn't noticed it until it was pointed out to him by Wells.

Wells realized there could be a practical use for nitrous oxide and approached Gardner Colton, the show's manager. He asked Colton if the gas could be used to alleviate the pain of dental procedures, or more specifically tooth removal. Colton was unsure but invited Wells to perform a test the following morning. Wells was accompanied by John Riggs, an ex-student and dentist. Wells had a painful wisdom tooth that would provide the test for his theory. He inhaled nitrous oxide from a leather bag until he nodded off. Once he was under, Riggs pried the tooth from his former teacher's mouth. Wells woke just a few minutes after the procedure and proclaimed, "I didn't feel it so much as the prick of a pin."

From there, he quickly made use of this newly discovered source for anesthesia, offering it to patients when pulling teeth. As news circulated, he became so busy with work that he instructed colleagues on the production and use of the gas. In a matter of months people from points far and wide were travelling to Wells' practice to have their teeth extracted.

Wells attempted to take his discovery further by teaming up with William Morton based on a friend's suggestion. Unbeknownst to Wells, Morton was a proficient con man and a poor choice for a partner. Nevertheless, the two contacted John Collins Warren, head of surgery for Massachusetts General Hospital in Boston. Warren agreed to arrange a public demonstration to take place towards the end of January 1845. After administering the nitrous oxide to a student volunteer with a bad tooth, Wells performed the extraction. Whether he didn't administer enough gas or it was impure, the student made some type of sound of protest when the tooth was removed. Upon waking, even though the patient claimed he had felt no pain during the procedure, Wells was laughed out of the demonstration.

Afterwards, Morton attempted to claim the discovery of anesthesia as his own and began experimenting with ether. Wells, for his part, experimented with chloroform. In the end, it led to an addiction that landed him in jail one night. In prison, a despondent Wells bled to death when he used a razor he had smuggled in to cut an artery in his leg. It's unlikely he felt any physical pain - he had also smuggled in a bottle of chloroform and administered it before using the razor.