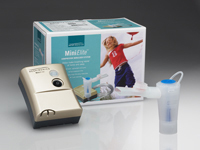 Nebulizers are an important
market for Philips
Philips says it has acquired a branch of Italy's Medel SpA's business related to aerosoltherapy to boost its home-based, battery-powered nebulizer business in Europe and in other parts of the world. Medel is a leader in portable nublizers and has a strong market position in Europe and around the world.

Medel developed Philips' MicroElite portable nebulizer, introduced in 2008 and its MiniElite nebulizer, unveiled in 2006, Lloyd says. She says Medel has a "broad portfolio of table-top compressors, as well as technology leadership in portable, battery-operated compressors."

Philips has been "very successful in the U.S. respiratory market" since acquiring Respironics last March for $5.1 billion, she says. "Now, Philips is the leader in delivering aerosolized equipment for asthma, COPD, and cystic fibrosis.

"However, in the future, we would like to become the leader in aerosol drug delivery systems for non-respiratory conditions as well, such as pulmonary hypertension [not a respiratory disease but a blood pressure condition] and indications such as migraines and insulin delivery for diabetics," she says. The medication would be absorbed via the lungs instead of by injection or pill.