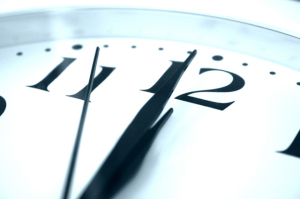 A rare New Year's Eve
Time Change
The spin of the Earth is slowing down. Not by much; only about 0.002 seconds a day (it varies), relative to our modern definition of the second.

The varying rotation of the Earth is due to the cumulative effect of friction from the ocean's tides, the moon's orbital momentum, snow (and the lack thereof) at the polar ice caps, the 23-degree tilt of the Earth, the atmosphere, solar wind, space dust and magnetic storms. In any case, the Earth does not rotate exactly once every 24 hours (or 86,400 seconds).

This fact was of little consequence and went unnoticed until the highly accurate atomic clocks developed by the National Institute of Standards and Technology (NIST) and others around the world arrived on the timekeeping scene in the late 1960s.

Thanks to precise measurements of the position of the Earth relative to the stars made possible by the atomic clock, the Earth's rotation was found to be gradually slowing down. But the minuscule slowing of the rotation is not the primary reason for adding a leap second. The definition of the second itself--and its cumulative measurement of minutes, hours and days--does not match the Earth's rotation.

This keeps Coordinated Universal Time (UTC) in sync with astronomical time--that being the position of the sun above the Earth--and the leap second was born.

When the Earth gets sufficiently out of sync with UTC, based on observations from the International Earth Rotation Service (IERS) in Paris, a leap second is scheduled. After several months' notice, the leap second is added at 18:59.59 Eastern Time (corresponding to 23:59.59 at the zero meridian in Greenwich, England) on either Dec. 31 or June 30.

This year, New Year's Eve celebrations in the United States won't feel a thing because the adjustment is made just before 7 PM, Eastern Time. Those interested can watch the leap second occur by logging on to www.time.gov before midnight, London time, and clicking on their time zone.

There have been 24 leap seconds added since the practice was begun in 1972, the last being in December 2005. No special adjustments need be made by us humans because most of the gadgets we use-computers, cell phones, GPS units, etc.-adjust themselves automatically.

So yes, 2008 will be a little longer than normal this year. But not so much that you'll be embarrassingly early to that New Year's Eve party.